Everything About You by Heather Child 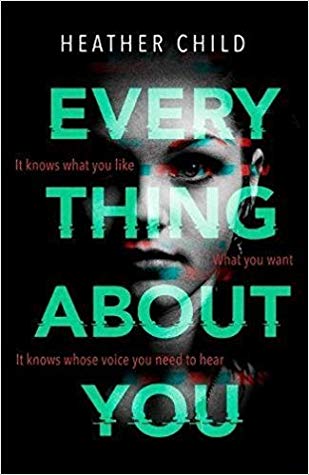 An engrossing novel that explores where Amazon Echo, Facebook, AI and VR are taking us. I kept waiting for something big to happen in this near-future science fiction thriller, but I learned later it already had and I didn't recognize the significance. A twentysomething grieving for her missing and presumed dead sister begins using technology called a smartface that can mimic the personality of anyone through data mining their entire digital footprint, producing an effect so compelling that people aren't sure whether an idea came from their own brains or the tech. Freya, a London resident who has fallen off the affluent career track because of a phobia to VR, can't get past the loss of her foster sister Ruby, who disappears during a dangerous late-night walk to retrieve her from a party after they argued. Child has clearly spent a lot of time contemplating the pervasive and oppressive places modern tech could be sending us. I only spent a week there as a reader and I'm pretty unnerved.