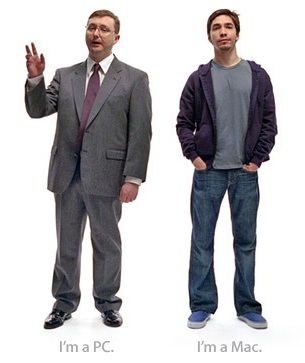 A few years ago, in one of Apple's last big marketing campaigns while Steve Jobs was alive, the company mocked Microsoft by having Justin Long portray a Mac and John Hodgman a PC in TV commercials. Long's comfortably scruffy dude in sneakers was supposed to be cool, while Hodgman's pudgy businessman was supposed to be a dork who couldn't quite catch up to the times.

I wrote in 2007 that the commercials were doing something for Microsoft it couldn't do for itself -- make the company lovable.

The Mac hipster played by Justin Long is insufferably smug compared to his problem-plagued comic foil, who ends up looking like a well-intentioned underdog unruffled by adversity. He's like Charlie Brown, falling over and over for Lucy's promise to let him kick the football. ... When I spot one of those commercials as I'm blipping through Tivo, I stop to see how Hodgman fares.

As my link shows, Hodgman wasn't rooting for himself either. The Daily Show contributor called his character "delusional" for believing he was cooler than a Mac.

In a piece for The Guardian about his new non-fiction book The Kraus Project, the author Jonathan Franzen reveals himself to be another person who hated Mac Dude:

Any chance that I might have switched to Apple was negated by the famous and long-running series of Apple ads aimed at persuading people like me to switch. The argument was eminently reasonable, but it was delivered by a personified Mac (played by the actor Justin Long) of such insufferable smugness that he made the miseries of Windows attractive by comparison. You wouldn't want to read a novel about the Mac: what would there be to say except that everything is groovy? Characters in novels need to have actual desires; and the character in the Apple ads who had desires was the PC, played by John Hodgman. His attempts to defend himself and to pass himself off as cool were funny, and he suffered, like a human being. (There were local versions of the ad around the world, with comedians David Mitchell and Robert Webb as the PC and Mac in the UK).


Plus, the message that "if you go Mac, you can be one of the cool kids" runs counter to some pretty strongly held moral principles (at least people like to think that they aren't slaves to fashion). On the flip side, beating up on the nerd has become deprecated as geekiness becomes more fashionable.

That ad campaign was one I found of great interest during the years it was running. I didn't understand how the public could look at Justin Long in those spots and not see "overwhelmingly smug" as his character's primary characteristic.


Unlike Franzen I did buy a Mac in that period. It's a really nice machine, but I'm still working primarily in Windows.

The point of the campaign wasn't to make the Mac look loveable, it was to make the PC look feckless.


The "insufferable hipster" stereotype was already one people associated with Mac users. Running away from that would have made Apple look defensive at a time they wanted to be on the attack, so instead they embraced it in a way that everyone looking at the ad could identify which of the two actors was the Mac before they opened their mouths.


On the other hand, "nice, even huggable, but clueless" was a completely novel and unusual way to portray Microsoft, which was still seen by most as the ten thousand tonne fire-breathing dragon of the computer industry: huge beyond imagination, invulnerable, inevitable and above all else ruthless. The Mac vs PC ads were aimed squarely at defanging Microsoft.


I made a related point at the time: the archetype is lifted straight from Roadrunner vs Coyote: fishbowl.pastiche.org

The Roadrunner vs. Coyote comparison is great, but some of the comments to your blog post demonstrate what Franzen is talking about in his essay, particularly this one:


"I think the ascribing of the 'arrogant' trait to Justin Long's character is more about the fact that any Mac user I know (and I have been one since '85) has always known that he/she has access to a superior tool and it is impossible not to just pity the typical PC user a little bit as they struggle so valiantly either with their computer's shortcomings or in trying to justify why they really have the better tool. ... It is impossible not to be a bit arrogant and be a Mac user. Just can't be done."


The mere ownership of a Mac is treated as sufficient cause for a sense of superiority.


At the time the Long/Hodgman commercials began in 2006, I didn't see Microsoft as the 10-ton dragon of the computer industry any more. It was five years after Windows XP and the new Vista version was laying an egg, Mozilla Firefox had taken a huge chunk out of Microsoft's browser share and a lot of my work had moved into the browser where the operating system didn't matter that much.


Certainly today, as Microsoft's market share of computing devices is so much smaller because Apple iPhone and Android are kicking its butt in mobile, Apple couldn't portray Microsoft as a monster that needed to be defanged.