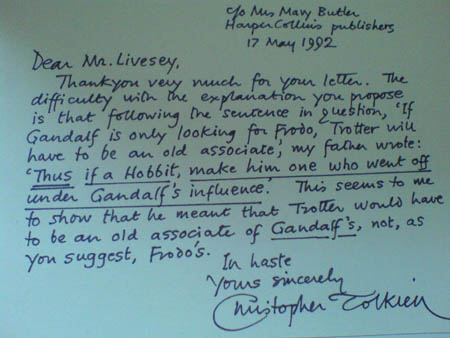 Christopher Tolkien, the son of J.R.R. Tolkien, gave his first interview to the media last year after being his father's literary executor for four decades. Speaking to the French newspaper Le Monde, the 87-year-old expressed great unhappiness with the Peter Jackson movies even though they helped sell 25 million copies of the books in three years, a 1,000 percent increase:

Invited to meet Peter Jackson, the Tolkien family preferred not to. Why? "They eviscerated the book by making it an action movie for young people aged 15 to 25," Christopher says regretfully. "And it seems that The Hobbit will be the same kind of film."

This divorce has been systematically driven by the logic of Hollywood. "Tolkien has become a monster, devoured by his own popularity and absorbed into the absurdity of our time," Christopher Tolkien observes sadly. "The chasm between the beauty and seriousness of the work, and what it has become, has overwhelmed me. The commercialization has reduced the aesthetic and philosophical impact of the creation to nothing. There is only one solution for me: to turn my head away."

I grew up reading Tolkien and eagerly attended the first Lord of the Rings movie. I haven't seen the rest yet, but the original film did not cheapen the books, which were full of action that appealed to young readers. When I was a teen, I did not devour The Hobbit and Lord of the Rings because of their "seriousness," though I suspect I would value that upon a rereading. I don't see how any movie or TV adaptation could damage the experience of reading the book on which it's based, particularly an enduring classic like the novels of Tolkien. The words are still there in the proper order.

Amazingly, the studio that made Jackson's films told Tolkien's estate they didn't make any money -- so it wasn't entitled to a cut of profits. "We were receiving statements saying that the producers did not owe the Tolkien Estate a dime," said Cathleen Blackburn, an attorney for the estate.

I hope the accountants were mumbling "my precioussssss" to themselves as they cooked the books.

Hollywood accounting is always baloney. No movie or show will ever show a profit, one way or another. And the people that write the contracts that way also know it never happens.


You have to go the George Lucas/James Cameron way of making movies with your own money and making sure that you are the executive producer to actually see the real profit(s).

Well that certainly goes a long way toward showing how ppl are apt to go off half cocked without full information, as there are a ton of people criticizing poor Chris and his dislike of the films solely because they believe the estate of Tolkien is making "millions" off the film adaptations.