I hit a bad streak reading novels this month. My house is overflowing with books I've been meaning to read, so I will give up on a novel when I've abandoned all hope of being entertained. I figure if I'm not enjoying a book after 50 to 75 pages, it's time to bail. I reached that point with Wilson Tucker's The Year of the Quiet Sun (1970) and Philip K. Dick's The Divine Invasion (1981). 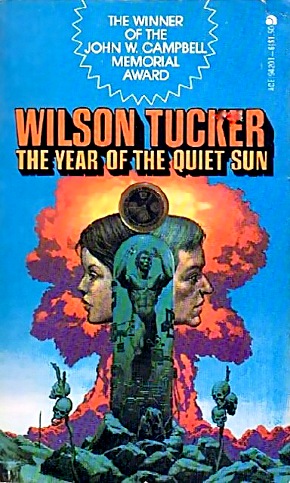 Quiet Sun is a Nebula Award-nominated time-travel novel by the late Wilson "Bob" Tucker. He was an active science fiction fan who belonged to the Fantasy Amateur Press Association (FAPA) and coined the term "space opera."

As a current member of FAPA and a time-travel geek I wanted to like the book, but after 70 pages Tucker was still putting the main characters together. Nothing had happened yet. No time travel. No plot twists. Just talk talk talk. The male protagonists pass the time pontificating about their fields of study and making moves on the young female bureaucrat who recruited them. She's in her 20s and the prospective time travelers are an older scholar and two military officers. Their constant attempts to flirt with her may have been standard operating procedure in the free-love-and-sideburn '70s, but Tucker never shows her reciprocate anyone's interest -- so it feels like actionable sexual harassment.

Wikipedia's synopsis of the novel reveals that the time-traveling Don Drapers go to the future and find a U.S. embroiled in race war: "Moresby goes first and travels to July 4, 1999 ... only to emerge in the middle of a racial civil war in which Chicago had recently been attacked with a nuclear bomb launched from China on behalf of black guerrillas." I might have stuck with the novel if I knew it was fueled by early '70s fear of a black planet.

I hadn't read anything by Philip K. Dick before trying Divine Invasion. The book's about a virgin conception on a remote industrial planet. The savior fetus Emmanuel is the son of Yahweh, and he needs to return to Earth to take the planet back from the devil Belial, who has been running things since the fall of Masada in the first century AD. Belial controls Earth through a one-world government that's a "unification of the Communist Party and the Catholic Church."

This is odd enough to catch my interest, but Dick's plot feels like an excuse to engage in ponderous theological ruminations on God, the Bible and the Torah. Here's an example:

Emmanuel watched, and presently the cat came to him and asked to speak to him. He lifted it up and held it in his arms and the cat placed its paw against his face. With its paw it told him that mice were annoying and a bother and yet the cat did not wish to see an end of mice because, as annoying as they were, still there was something about them that was fascinating, more fascinating than annoying; and so the cat sought out mice, although the cat did not respect the mice. The cat wanted there to be mice and yet the cat despised mice.

All this the cat communicated by means of its paw against the boy's cheek.

I usually struggle with this kind of pass-the-bong storytelling. Give me literal fiction with relatable characters. I have an allergy to allegory.

Rogers, as a long-time reader of yours, I almost never disagree with your point of view, but Divine Invasion is one of my favorite all-time books. You might want to start with the beginning of the trilogy - "Valis". It's not exactly a linear trilogy, but each book does set up the next.

I didn't know it was a sequel of sorts to Valis until it was too late. What did you like about it?