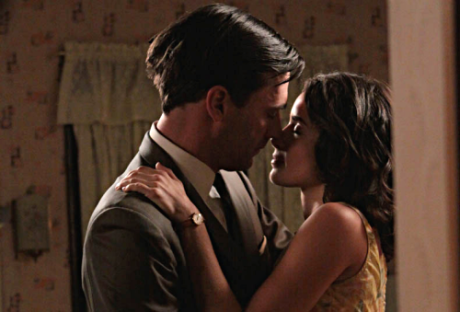 I've become an obsessed viewer of Mad Men this season, catching each episode on its first Sunday night airing and hitting the web afterwards to read reactions. The best place to do this is the blog of New Jersey Star-Ledger television critic Alan Sepinwall, who posts an extremely long critique of each episode that attracts hundreds of interesting comments.

For several weeks, Sepinwall's readers have been increasingly critical of Suzanne Farrell, the outspoken young teacher who is Don Draper's latest hoochie mama. They think she's "cuckoo bananas" and a Fatal Attraction waiting to happen, which I find to be a weird reaction.

I posted a comment along those lines Sunday night, asking this question, "When did an assertive woman who is open and direct about her feelings and clear about her needs equate to crazy? Particularly in the world of Mad Men where the cost of repression is made so abundantly clear."

Sepinwall responded: "I think the drunk-dialing scene in 'The Fog' and the eclipse scene in 'Seven Twenty Three' provided enough in-show evidence for people to at least wonder if something is off about Miss Farrell, if not know for sure that there is."

Though subsequent episodes may prove me wrong, I think Farrell makes viewers tense because she's more self-aware than any of Draper's previous conquests. This trait makes it harder to believe that once they're over, she'll go quietly into that good night.

But it does not make her a bunny boiler. Farrell has never done anything that would call her sanity into question more than, say, masquerading as another man and continuously pursuing empty sexual relationships that could destroy your family.

If you show up next Sunday night on Sepinwall's blog, make note of his rules: Don't post spoilers or talk at all about the preview of the next episode.

You are getting worked up into a lather over a ficitional character?

Mad Men is a brilliant television show that's on a par with great literature. I don't think there's any shame in getting worked up about it.


Now if I start talking about Claudia's comeuppance on General Hospital, then I could understand a little mockery. Sonny never should have married her. Now what's going to happen to Carly and the baby?

I agree there. I thought she sort of went over the edge when she called his house and TOTALLY off the deep end when she got on the train with him. I think she is a needy person and she wants to know what's going on. You can tell that by the way she reacted when Don stayed in the house for so long. I was afraid she was going to walk in.

As with most TV dramas today, people who like Mad Men are not very bright.


Psuedo-intellectual tripe. All of the dialogue, situations, plot-lines are obvious and predictable. It's downright cringeworthy how bad this show truly is.


It's really sad how stupid Americans have become over the last generation or so.

Yes, there is shame in you getting worked up over it.

I enjoy this show very much and recently caught up with all 3 seasons. I find Miss Farrell to be a little crazy as well. You're right about her self-awareness. This might lead her to do something that can place Don and his family in a tough situation. Don't think we've seen the last of her.


Personal bias though - the actress playing Miss Farrell played one of Ted's (How I Met Your Mother) fling, and she was psycho. Ever since then I've thought the actress would resume that role.