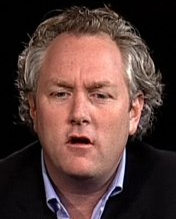 Andrew Breitbart's a right-wing journalist in Los Angeles who coauthored the Drudge Report for years without getting any credit. He now runs Breitbart.Com and Big Hollywood and writes columns for the Washington Times. Breitbart.Com, which consists primarily of wire content, receives 1.7 million unique visitors a month, an audience he built by linking to the site frequently while working for Drudge.

All external indicators would suggest that Breitbart has a lot to be happy about, but I've followed his work for years and he operates in a constant state of anger at the perceived mistreatment of conservatives, particularly in Hollywood. Since he's around my age, he's lived during an era in which the right wing was ascendant in American politics. I'm not sure he could have survived the '60s and '70s, back when conservatism was the marginalized ideology of Barry Goldwater and washed-up B-movie actors.

After the blog Gawker ran an item Thursday criticizing Matt Drudge's coverage of the Holocaust Museum shooting, Breitbart left the writer an irate voicemail complaining about the use of "right-wing extremist" to describe shooting suspect James von Brunn:

I'm basically fuming and I'm reading your ---- at Gawker right now saying that this guy is a right-wing extremist and it's such a ------- slander on people like me.

This guy went after, this guy was after neocons like me who are conservative. He had the address to Weekly Standard there. Conservatives believe in individual liberty. They don't believe in groups' rights. This guy's a multiculturalist just like the black studies and the lesbian studies majors on college campuses. This guy was a 9/11 Truther. This guy's hardly a right-winger. This guy's political philosophy is more akin to the drivel that you hear on a college campus that delineates us by group -- not by individuality. It's the exact opposite of my political philosophy.

It's deeply offensive that you would use this for political gain. I could care less how you describe me in regards to Drudge or anything, but for you to put on me this -------- crime against humanity -- so ---- you beyond the pale.

I don't pay much attention to attempts by liberals and conservatives to score points by branding the latest homicidal nutjob as a member of the other team. When you go far enough to the extremes, the right and left wing meet. But I love Breitbart's logic in calling anybody who maligns an entire race or religion a liberal because he's treating people as a group instead of individuals. So all racists are multiculturalists! Up is down. Cogito ergo stupidum.

Last month, Breitbart devoted his Times column to an apology to some protesters he flipped off in a rage as they marched past Shutters, a Santa Monica restaurant where he had taken his wife on a date:

... when one dude raised his fist like runners Tommie Smith and John Carlos did at the 1968 Mexico City Olympics, I could not hold myself back. I jumped from my seat and bolted to the center of the balcony, where the American flag waved furiously in a now-harsh wind. Positioned next to Old Glory, I countered the young punk and reached out my right arm directing my middle finger in his direction.

As soon as my finger was raised, a phalanx of photographers began snapping away at the white middle-aged man wearing a white LaCoste shirt next to the old red, white and blue. Cognizant of the power of imagery, I owned the moment and refused to back down. The fist wielder immediately dropped his arm. I clearly had won and envisioned photos of the anti-antiwar protester making the front pages of the Los Angeles Times.

It turned out that the protesters were not marching against the wars in Iraq and Afghanistan, as he originally surmised, but against the abduction of children to fight wars in Uganda and the Congo. Though Breitbart's apology was gracious, he makes clear that he would have no problems ruining dinner for his wife and other restaurant patrons if those other antiwar activists needed to be put in their place.

In a piece last year for New York Observer, writer Spencer Morgan managed to make Breitbart look crazy simply by following him around a few conservative social gatherings and quoting him at length. After Breitbart went on for hundreds of words about how "uninteresting" Hollywood is, and he declared that sex with Maggie Gyllenhaal would "almost disgust me," Morgan described him this way:

Mr. Breitbart grew up in Los Angeles. His father owned a restaurant, mom was a bank executive. At Brentwood High School he watched administration types socialize with certain parents in the entertainment industry. He got C's, played baseball, was a class clown, but hung out with the smart kids. He always suspected that school had been against him, a conspiracy theory that was eventually confirmed by a friend's mom who confessed to him that the principal had called her into his office to turn her against the young Breitbart. This, he says, was the beginning of a lifelong crusade against bullies.

I'm guessing that principal was a liberal, and perhaps even a black lesbian multiculturalist.

a very envious and spottily put together piece you've written here, rcade - informative, but wreaks of a week old slam sammich - forgive me if that seems a little harsh. even though thee and me do rarely agree, i have a great amount of respect for you. you would do better to praise breitbart's accomplishments rather than drag him down - you are cut from the same journalism cloth - his big hollywood is a tremendous success (he has quite a few leftwing writers there also) and i believe you'd find yourself going there daily...IF you'd stop trying to be like every other leftist. spread your wings!

I'm not trying to drag him down. I follow his career. I just don't understand how the guy can rage against Hollywood liberals for 15 years (and counting), and why he'd think flipping off antiwar protesters while on a date with his wife is a good time.


Spud wouldn't describe him as a right wing extremist per se.


However, like most right wing pundits, he can be described as extremely volatile.


Seriously, he figures standing up and giving the finger to a group of protesters while out fer dinner with his wife is somehow appropriate (or would have been if they were anti war protesters)?


An act of patriotism cos he did it in front of a flag?


Nice pic of AB there, Rcade.


He looks like Christopher Hitchens after a bender, a lobotomy and quite possibly a waterboarding session and then maybe with a touch of Fat Elvis thrown in fer flava.


C'mon this is a guy who thinks Oprah Winfrey is running the country.


How seriously are people supposed to take this guy anyway?


Oddly enuff had not made the Drudge-Breitbart connection.


Ta fer clearing that up. Almost obvious in retrospect.

Psychopathy-
Lack of a conscience in conjunction with a weak ability to defer gratification and/or control aggressive desires, often leads to antisocial behaviors. Psychopathy does not necessarily lead itself to criminal and violent behavior. Instead, psychopaths high in social cognition may be able to redirect their antisocial desires in a different, non-criminal manner.[citation needed]


I think that sums up the neo-nazi... I mean neo-conservative (snicker, snicker, LOL) movement. Ya know guys, it is much easier to see the REAL world when you don't have your head packed so tightly up your butts...just a thought. Have a nice day..else where

On James von Brunn and his pals in the Reagan administration and Birch Society: