Arguing Politics During My Vasectomy

To give you an idea of how tough my wife is, she delivered two of our sons via natural childbirth, skipping out on epidural anasthesia in the belief it's better for the baby. One son was 11 pounds and three ounces. When he hit the birth canal, her screams were so loud that I asked for a sedative to calm my nerves. Nurses stuck around after their shifts to find out how much he weighed.

To give you an idea of how tough I am, I researched vasectomies for five years before consenting to the procedure. You can't be too careful about these things. I wanted to give the medical community time to work out the kinks.

So it's last Friday, and I find myself at Planned Parenthood in Jacksonville, lying flat on my back with my pants around my ankles, trying to find my happy place. A urologist begins handling up on my junk, explaining each step in the process with the unabashed enthusiasm of Bill Nye the Science Guy.

Desperate to change the subject, I look away from my imperiled dingus and tell the doctor about a problem I had completing the online registration on his web site. The components of the web form disappear on Mozilla Firefox when you begin to input data. I had to switch to Internet Explorer to get it to work. He seems interested. We lament cross-platform browser incompatibilities and get into a debate about whether Safari or Firefox is the second most popular browser among users. He lays a surgical drape around my genitals. I let him win the argument.

I tell him that I publish sites, and when he asks which ones I am faced with a socially difficult decision: Do I tell the person approaching my wang with a cauterization tool that I publish a stridently liberal web site?

Keep in mind that we're in conservative North Florida, where doctors and just about everybody else are rock-ribbed Republicans and the presidential campaign's getting angrier by the day. Some of my neighbors in this right-wing community are finding it difficult to accept that a Democrat might win the White House. They thought a cure had been found for that disease years ago.

I bite the bullet and tell the doctor about the Drudge Retort. My wife, who's in the room observing the surgery without an ounce of squeamishness, visibly winces.

The doctor's Douglas G. Stein, a Tampa urologist who offers a no-scalpel, no-needle vasectomy procedure that's advertised throughout the state. His web site offers more reassurance to fearful patients than my wife was ever offered before childbirth. I'm not the only guy with a heightened sense of anxiety regarding my tallywacker.

How is vasectomy done without a scalpel?

No-scalpel vasectomy instruments, used in China since the mid-70's and introduced into the United States in 1989, are simply a very pointy hemostat, used initially to make a tiny opening into anesthetized skin of the scrotal wall, and a ring clamp, used initially to secure each vas tube in turn beneath this opening. The pointy hemostat is then used to spread all layers (the vas sheath) down to the vas tube itself and to then deliver a small loop of the vas through the opening as the ring clamp is released. In turn, the ring clamp is used to hold the vas, while the pointy hemostat spreads adherent tissue and blood vessels away from the vas under direct vision, so that the vas can then be divided with a fine surgical scissors and the upper end cauterized with a hand-held cautery unit so that it will seal closed.

How is vasectomy done without a needle?

Traditionally, a local anesthetic has been injected into the skin and alongside each vas tube with a very fine needle, as small as diabetics use to inject themselves with insulin. One could feel a tiny poke in the skin, then a bit of a squeeze as the anesthetic was applied to each vas tube. However, most people do not like needles of any size ... especially there!

A MadaJet is a spray applicator which delivers a fine stream of liquid anesthetic at a pressure great enough to penetrate the skin to a depth of about 3/16", deep enough to envelop the vas tube held snugly beneath the skin. Each vas is positioned in turn beneath the very middle of the front scrotal wall and given two or three squirts. That numbs the skin and both vas tubes adequately for 99% of men.

Stein becomes so animated talking politics that he doesn't announce the cauterization of my first vas tube. I figure it out when I spot a small wisp of smoke rising to the ceiling above my bits and pieces.

When I mention with excitement my recent Obama rally trip to Orlando, he asks if I saw the following billboard on my drive down Interstate 4. 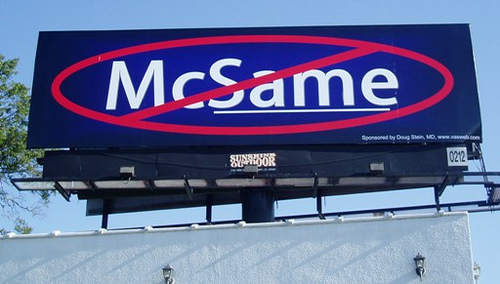 I say that I did, still unsure whether the doctor -- who has one testicle to go -- leans left or right.

At this point, Stein offers a final bit of reassurance: "Those are my billboards."

As Florida blogger Jim White recently discovered, Stein replaced several of his vasectomy billboards across the state with the cutting message "Stop McSame." Stein tells me with great excitement the interest his effort has generated. White calls this campaign "preventing unwanted presidents."

I relax, to the extent that it's ever possible to relax while a stranger applies scissors to your mantackle.


wait'll one of your buddies comes by to see how you're doing and you whip back the covers with the boys sitting there in all their glory on an ice bag and they keel over in laughter and there's no way you can put the whack on them! yeah, just wait.

I didn't need an ice bag or any other kind of cold compress. I just had to stay reclined catching up on One Life to Live and keep children and cats from landing on them. Easy peasy lemon squeezy.

Did they use the real small tool set?


Ahahahahaha, you are lucky the doctor didn't turn out to be Niceville in real life.

Lucky you. I bet your doctor also waited for the local to work before cutting and sealing. And I see you didn't even have a cat to jump off the top of the couch after your freezing wore off. I didn't realize that was as common a problem as it appears.


Everybody who's had dental work knows the feeling of having your face melting as the freezing wears off. Imagine feeling that between your leg

Now there's a story to pass down to the kids!

"Those are my billboards."


Thanx fer explaining the nuts and bolts of the procedure.


/Not to sidetrack or anything but, seriously, no luff fer the Sarah Silverman "Great Schlep" thread?


//C'mon, it's funny and involves the Obama campaign, old folks and Florida.

I have several relatives in Jacksonville. They call that area "South Georgia".


Ballsy move. Glad it worked out.

Glad you got all the kinks worked out in your tool kit, RC. Best wishes for a speedy recovery.


Here's a late story from 2004:
I had one small modest Kerry sign in my front yard. The morning after the election, I stepped outside the front door and my Kerry sign was on my stoop. I thought "WTH?" and picked it up. That's when I noticed the FIFTY-SEVEN Bush signs on my yard and the four stickers on my car.

That's funny stuff. Well, I can laugh because I wasn't the one with my junk hanging out there. I'm in Pensacola which voted 80% for Bush in the last two elections. I'm afraid that billboard would be burned to the ground here before the paint was dry. I love that he did the billboards. I guess you picked the correct doctor.

This is BRILLIANT- one of the funniest things I've read in a good long time. If I had a cup of coffee (thankfully, I don't) I'd be cleaning it off my monitor right about now! ;-)

Dude, you were in Planned Parenthood.


This should have been a good indication that you and your liberal junk were perfectly safe. I'm only surprised the Doc didn't give you some abortions coupons on your way out.

Ahhh, such a wonderful story. I would totally submit it for CSOTD, if the damn website still worked.

Congrats to you for going through with this procedure. No small sacrifice. and thanx for a so funny narration.

It's worth noting you steeled your resolve for such a life altering surgery - mindful you were denying your future trophy wife an heir - by paying a visit to your cruel.com ginger crotchfruit.


Rest assured your appearance struck a high-street 'high note' and was immediately filed along with our other neutered breeder testimonials.

I am so proud of your doctor! I'd heard about the billboards, but had no idea who'd put them up. Hope you and the boys (Not your children! You know what I mean) are back to feeling normal...

Mine happened in Thailand, 1971, and using scalpel.


Unfortunately, the doctor hadn't taken into account an extensive varicocele and had to use a lot of time doing one side. So much so, that the anesthetic began to wear off in the middle of the other side ... that side's incision feeling like a painful pinch


The snips and cuts, stiches and antiseptic weren't anything compared to the painful epididymitis, and worry that I might be about 500 years too late to become a famous (even if infamous) eunuch mandarin; if not stuck in some hell of a harem!


Fortunately, the third course of antibiotics did the 'trick', and notwithstanding the high temperature that resulted, before the final denoument, and where my doctor took credit for there being no sperm in the test sample.


Fearing some sort of reprisal, I suppose, my doctor apologized continuously throughout my ordeal ... not that yours was actually 'pleasant', mind you.