I made the two-hour trek to Orlando yesterday to attend my first Barack Obama campaign rally, an event that brought 40,000 to 60,000 people to a plaza outside Amway Arena. Arriving an hour before the event, I knew to avoid the streets around the arena and parked my car at the Citrus Bowl, where buses were available.

Most of Obama's speech was so familiar I could have delivered it myself, as someone who has seen every one of the 30-plus debates he has participated in during this long campaign. One of his new remarks was a response to Sarah Palin's recent comment where she objected to the McCain campaign's use of robocalls. Obama said, "You have to work really hard to violate Gov. Palin's standards on negative campaigning." 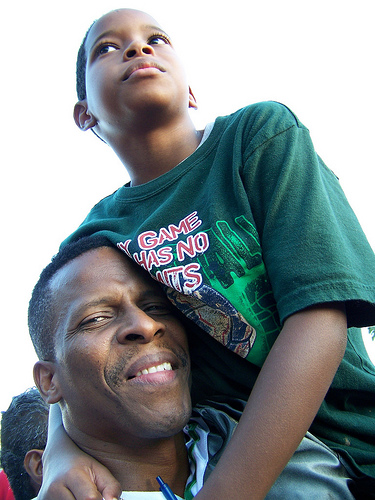 Hillary Clinton, making her first joint appearance with Obama since July, gave a sharp 15-minute speech that tied John McCain to President Bush's economic policies and touted the record of the last Democratic president on the economy. She coined a new slogan, "Jobs, baby, jobs!", that was chanted a few times by the crowd. For some reason, chanting is harder in person than it seems like it would be on television. I couldn't keep up with the speed of the crowd racing through "Yes we can!" and "O-BA-MA!", and I found myself wishing that Democrats had a few more well-practiced exhortations in our repertoire, like "U-S-A!"

I needed too much personal space to get close to the stage, relying instead on a giant screen to follow the speeches. (You can find me in Flickr photographer Rob McCullough's crowd shot, where I'm an unshaven gray-haired smudge with a tree growing out of my head.) Throughout the event, black families, some with aging grandparents and young children, gently moved through attendees to get closer. Although the crowd was racially and generationally diverse, you couldn't miss the emotion of blacks who had come to see Obama's first event in the city. As an adopted Floridian who has learned the tragic history of race relations in the Sunshine State during my decade here, I had to marvel at the progress that brought some of the older Americans in attendance past central Florida's Rosewood massacre, Klan lynchings, poll taxes and the civil rights struggle to this amazing moment in time.

Despite the size of the crowd and the zeal of some attendees to get a better spot, I can't recall a large event I've attended where people were in a better mood. Even at the Citrus Bowl, where more than 2,000 people were still in line to get on buses 15 minutes before the 6 p.m. start of the event, I heard no complaints.

Stories from early voting sites across Florida and other states this week describe huge lines where people aren't leaving, no matter how long it takes. Looking at the bus line in Orlando and the faces of the crowdgoers who made it to the rally on time, I think there are millions of Americans who regard casting their vote this year as one of the biggest milestones of their lives. Turnout this year will be massive.

On the way back to the Citrus Bowl, as we drove through a dodgy neighborhood right on the outskirts of downtown, a car avoided an accident by swerving towards the bus and stopped a few feet from riders seated behind the driver. Even that near-miss didn't sour the mood.

Credit: The photo from the Obama rally was taken by Rob McCullough and is used with permission.

My daughter went to the rally and had pretty much the same experience as you. She is a first time voter this election cycle and was amazed at the enthusiasm of the crowd and the eloquence and passion of Obama (and to a lesser degree Clinton). I'm glad that she is able to take part in such a historic election.. one that I am sure she will remember for the rest of her life.

Ah, the Parramore area. Sure you can call it "dodgy" but I call it fun!

This was written by my son inlaw and I am so proud of the effort he puts into his belief of Democracy. I love you Rog.

If only belief in democracy was enough. Unfortunately, history has demonstrated that the "belief" and the "faith" in democracy, on its own, is the cause of its downfall.


The democratic majority discovers that it can acquire more and more "benefits" from government, and nominate and vote for those who promise the most for the citizens. In this case, it is Democrats offering "free" medical care, "free" college educations, and all that has to be done is tax, tax, tax the evil rich ... (but not any of those who don't pay any taxes, now, and which is approaching 40% of taxpayers.)


Meanwhile, the "rich" pay for over 70% of tax revenue - approaching the anarchy stage of "government", for sure!


Just watch insocialist Europe, where they are about 50 years ahead of us in giving "benefits" to "citizens". France, for example, and where they have even voted themselves a 30 hour workweek!


Can the USA, under Obama, be far behind this evolution into socialism, when the anarchists will (in their "majority") demand their cake-and-eats-it-too? Will they be guillotining the rightwing or the leftwing, then ... this party's members, or that one's, in the France of that time???


Maybe the promised "change" will speed things up here in the good old USA, huh? Your belief and faith will lead the way, Rogers ...

Hysterical! You should write a column for a newspaper like Erma Bombeck use to do!

The worshipping masses were 'happy', sounds like a Kim Jung ill rally.


I wonder how happy they will be when Hussein is sent back to Ayers and Wright on the 4th?


It's been forever since you mentioned Ayers & Wright, Rex -- I was downright worried about you!


Since you last posted, Obama's pulled ahead in Florida, Virginia and North Carolina -- and now he's forced McCain to abandon Colorado and New Mexico in a feeble attempt to try to win Pennsylvania (where Obama's up by 8 points). So by all means KEEP TALKING ABOUT AYERS & WRIGHT!


Keep obsessing... keep that anger going... Your Ayers & Wright rants (and the rants of McCain & Palin are going to help Obama win in the biggest landslide in 20 years!

Anger? don't have any.

In this case, it is Democrats offering "free" medical care, "free" college educations, and all that has to be done is tax, tax, tax the evil rich ... (but not any of those who don't pay any taxes, now, and which is approaching 40% of taxpayers.)


While it true that approximately 38% of taxable units in the US pay no income tax after you factor in returns it is also true that if you factor in excise taxes, payroll taxes, sales taxes and the like ALL families in America pay a significant percentage of their yearly income into the tax system.


You seem to fergit that while Yawn McLame disingenuously bleats on and on about how US corps need even more tax cuts than Bush gave 'em because "they pay a tax rate of 35%, one of the highest in the world" that the grim reality is that, due to lobbied loopholes, over 2/3rds of all US corporations (including the most profitable ones) pay absolutely NO TAX at the end of the day.


McBush knows this but he also knows that the "bewildered herds" he speaks to do not. That makes him just another lying rethug out to enrich his corporate cronies at everybody else's expense.


Meanwhile, his partner in crime, Scary Failin, plays the populist card repeatedly and keeps trying to stab Obama's campaign with the broken crayon that is the "Joe the Plumber" talking point.


Fun fact about Joe the Plumber. There are only 175 people in the US with that last name as Joe, all of whom are related to one degree or another. One of them relatives of Joe lives in Wassilla Alaska. How's that fer a coincidence? Hey, ya wanta hear another one? Joe's relative in AK races snowmobiles just like Todd "The American Hating Seccessionist" Palin.


/The more you know.


Nice start. I'd think you were a Democrat considering your level of sensitivity and politeness, but I know you are a Canadian socialist, instead. That explains quite a lot.


Excise is a legitimate source of revenue for the Fed, and permitted them under the Constitution. These are taxes on items like tobacco, liquor, firearms, coffee, tea, imports and exports, etc.


However, since you are Canadian, your error is forgivable ignorance.


There is no national sales tax, another freebie mistake that Canadian ignorance fosters to their foolish embarrassment.


"... and the like [like] ALL families in America pay a significant percentage of their yearly income into the tax system."


However, the Founding Fathers attempted to end the cycle of anarchy-tyranny-democracy-anarchy which had been the rule for all the world's attempts at Democracy - a failure caused by the democratic majority voting more and more benefits until the 'sytstem' failed and anarchy replaced democracy; with tyranny ending the anarchy. They thought to end the ability for government to *DIRECTLY* tax the individual, and thereby making the individual the slave of government, and allowing the "majority" to vote benefits from the public treasury.


They made rules. Government could only tax by apportioning the federal budget between the states and based on census.


Now, the federal government claims the *RIGHT* to force you to pay, or go to jail, lose your property, become a slave to government by having 2/3 of your wages *STOLEN* without court order and by IRS Kangaroo Court conspiring with your bank and employer to *STEAL* the money without a valid court order!


The IRS is a criminal, pseudo-legal entity which has removed individual freedom from America and turned us into the socialist/communist nation which *STEALS* from the people they put out of their homes because they =


"Spread the Wealth Around"


Now, you socialists, utopian communists want to elect someone who will sic the IRS onto more and more of Americans who have lost their savings to Democrat Wealth Spreading communsits giving houses to the *POOR* ...


I think you communists are in for a surprise, actually.


BTW, the IRS will have to put me in jail. I refuse to cooperate with a criminal, pseudo-legal entity designed to repress, intimidate and violate ... that's not what America was founded on, not on a calculated tyranny to force payment of the paper they created in the first place, and designed to end individual freedom promised in the US Consitution.


The National Sales Tax would be a valid tax, because it would be collected by state, according to census, and the infrastructure for the tax is already in place. Ending the IRS would save *BILLIONS* and also end the tyranny of government that has been in place since WWII and the "Volunteer Individual Income Tax"


I don't volunteer, anymore, to support this tyranny.


Thanks for publishing my formal protest(s), Rogers.