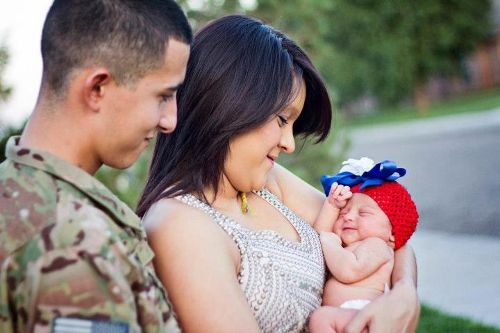 The deaths of seven U.S. service members in Afghanistan were announced this past week by the Department of Defense.

Four Army soldiers died Sept. 16 in Zabul Province when they were shot by Afghan police after coming to their aid at a security checkpoint that was attacked by insurgents. One of the four killed was Pfc. Genaro Bedoy, 20, of Amarillo, Texas, who had a wife and seven-week-old baby girl (pictured above).

Bedoy played wide receiver and defensive back for River Road High School. "Genaro was a good kid. He always worked hard for me," his football coach, Bryan Welps, told the Lubbock Avalanche-Journal. The coach said Bedoy talked to him about his decision to join the Army. "I thought it would be good for him," he said.

When the attack began, Raible was heading to video-chat with his wife and three children after dinner. Armed with a handgun, Raible rushed to the scene and coordinated the Marines' response before he and Atwell were killed by wounds suffered in an explosion. "It was very fitting that he was killed leading his men from the front," said Maj. Greer Chambless.

Remind me again Why are we in Afganistan?

We need to send the troops home by mid-2013. There's nothing we can accomplish in Afghanistan in the next two years that we didn't already accomplish the past 11.