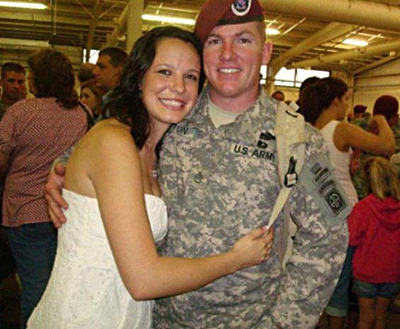 The deaths of nine U.S. service members in Afghanistan were announced this past week by the Department of Defense.

Army Staff Sgt. Matthew S. Sitton, 26, of Largo, Fla., was killed Aug. 2 in Kandahar province. Sitton, who was married and had a nine-month-old son Brodey, was on foot patrol when he stepped on an improvised explosive device, the Tampa Tribune reported.

The TV station WFLA filmed the arrival of his body at McDill Air Force Base, where his casket was met by his wife Sarah and other grieving relatives. "Every future plan that I ever had was based around him, so when I heard that news everything stopped," said Sarah (pictured above with her husband).

Sitton was the second member of a high school graduating class of 50 to die in Afghanistan. He was friends and baseball teammates at Indian Rocks Christian High School with Frank Gross, who was killed in July 2011 when an IED caused his vehicle to roll over in Khost province.

Just three months into his first deployment, Navy Petty Officer 3rd Class Clayton R. Beauchamp, of Weatherford, Texas, was killed by an improvised explosive device Aug. 7 when enemy forces attacked his unit during a dismounted patrol in the Shaban district of Helmand Province.

Beauchamp, 21, signed up for the Navy when he turned 17 and joined after graduating Weatherford High School in 2009. His older brother Christopher, 27, and younger sister Cheyenne, 19, also serve in the Navy. "He had a knack for making everyone around him better," his father, Jack Beauchamp, told the Fort Worth Star-Telegram. 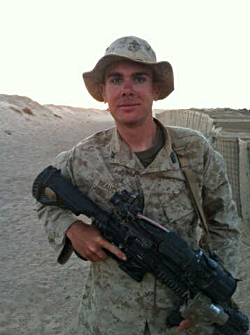 The rest of the casualties:

As of Wednesday, 1,941 members of the U.S. military have died in Afghanistan as a result of the U.S.-led invasion in 2001, according to Associated Press.