My First Trip into a Debate Spin Room 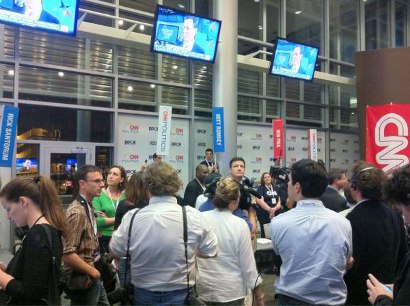 I was granted media credentials by CNN to report on the GOP presidential debate last night in Jacksonville for the Drudge Retort, the first time I've had the opportunity to cover a debate. The University of North Florida squeezed around 400 journalists into a campus ballroom, putting online media together in one corner. I was sandwiched between the Huffington Post and The Guardian.

A misprint on a sign led the British journalist Toby Harnden to think that Matt Drudge had come up from Miami to attend. When Harnden came over looking for the international newsman of mystery, I had to break it to him that instead of Drudge, he'd found me. He did not mask his disappointment.

The debate began with the National Anthem, which inspired only one in four of the journalists around me to stand up, though some of them were foreigners and are thus excused. A woman down my row from the conservative American Spectator rocketed out of her seat with patriotic super-speed.

During the debate, the second-loudest laugh was when Newt Gingrich began answering Wolf Blitzer's praise-your-wife question by complimenting the other candidates' ladyfolk instead. "I think all three of the wives represented here would be terrific first ladies," he said. The guy can't help himself. He just likes wives.

The loudest laugh was in the final answer of the night, when Gingrich referred to Saul Alinsky. Journalists laughed so hard at the mention of the name you'd think a drinking game was going on.

After the debate, I walked one floor downstairs to the spin room, where each candidate sent spin doctors to explain how his guy just mopped the floor with those other no-hopers. The first to arrive was former Minnesota Gov. Tim Pawlenty, sporting an impeccably tailored suit and a Mitt Romney lapel button to identify his allegiance. The reporters crowded 20 deep around him, and I quickly found myself experiencing body contact that's a sin to Rick Santorum.

Howard challenged me to identify the economists. "I need to know who these economists are," he said. "They could all be Keynesians."

Another reporter asked Howard how Paul, the leading vote-getter among Republicans under 30 despite being the oldest candidate in the race, had so successfully targeted young voters.

"I think they targeted us," Howard replied.

After asking questions of Bill McCollum and J.C. Watts, I approached Fred Thompson but something he was asked by another journalist caused him to skeedaddle. A reporter for Mother Jones blogged, perhaps jokingly, "I asked Thompson to speak about Gingrich's stance on the regulation of reverse-mortgages. He didn't respond."

The crowd thinned around Pawlenty, so I asked him about Lynn Frazier, the Jacksonville woman who had lost her job and could not afford health benefits. I thought this was the best question in the debate and the least adequately answered. The Republicans running for the White House love to talk about repealing President Obama's health reform but aren't saying much about what they'd do afterward for the 1-in-6 Americans who are uninsured. Frazier explained her circumstances and asked the candidates, "What type of hope can you promise me and others in my position?" The responses she received didn't offer anything more concrete than getting a tax deduction on purchasing insurance for herself as an individual. Paul's answer was particularly bleak. "Well, it's a tragedy because this is a consequence of the government being involved in medicine since 1965." I guess the uninsured need a time machine.

When I asked Pawlenty if Frazier should be happy with the answers she received, he said yes because Romney will bring down the costs of health insurance as president. "We need to make health insurance more affordable," he said, mentioning the tax deduction again.

I followed up by asking about people who can't obtain insurance at any price because of pre-existing conditions, one of the main problems addressed by Obama.

He replied, "Mitt Romney will be making it so people aren't excluded by pre-existing conditions."

After this, I horned in on a conversation Bay Buchanan was having about Newt Gingrich's body language during the debate. The first time Romney took shots at Gingrich, he stared daggers at him and Gingrich wouldn't make eye contact. After watching Gingrich silently debate his own shoes while Romney scolded him, I thought it was going to be a long night for the Speaker.

"That was extremely weird," said Buchanan, who is way hotter than her brother Pat.

When around 45 minutes had passed, the last of the spin doctors all left, like people at a family gathering who realize if they stay any longer they'll be asked to help clean up.

Fascinating. Congrats on getting the spot!

He did not mask his disappointment.


Would "crestfallen" be too strong a term there?


/First L was for Literally.


Did nobody else smirk when Gingrich, while noting Callista's accomplishments that made her fit to be First Homewrecker, praised her ability to blow a French horn?


I approached Fred Thompson but something he was asked by another journalist caused him to skeedaddle.


Ordinarily Fred Thompson can be found ambling or sauntering. Anything that pushed his gear all the way up to "skeedaddle" must been something of great import


/Unless he was just late for his late afternoon nap, of course.


"I need to know who these economists are," he said. "They could all be Keynesians."


Rcade actually did it?


Spud owes the blog-god a beer.


"Well, it's a tragedy because this is a consequence of the government being involved in medicine since 1965."


Yer a better man than Spud.


"That was extremely weird," Buchanan said.


Yeah, Spud thought so too for a second but then thought of all the chances Newt has had to perfect that particular stance and realized it was prolly a default mode thing kicking in.


When around 45 minutes had passed, the last of the spin doctors all left, like people at a family gathering who realize if they stay any longer they'll be asked to help clean up.

Sounds like you had a very memorable experience. Well written article.