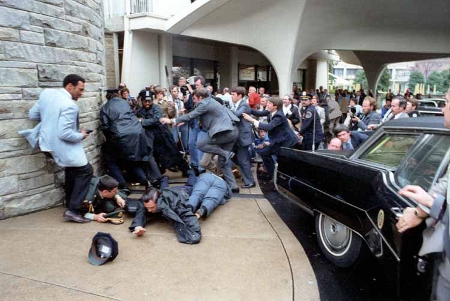 A reader to National Review Online says that he became a conservative because of how his fellow college students at Kent State University responded to President Reagan's shooting:

I came back to my dorm to see the TV lounges filled with students fervently wishing for the president not to survive the surgery. The worst of will was being expressed toward "Ronnie Ray-gun," to use just one of the epithets.

Right then, I knew that, whatever side I belonged on, it wasn't the one where people were wishing for the death of the democratically elected president. For the first time, I started to pay real attention to American politics, and to investigate what American conservatism really was.

I don't comment often on right-wing sites, but I made an exception here because conversion stories like this one always seem a bit ridiculous to me. I was 13 when Reagan was shot in March 1981 and vividly recall following the news at my grandmother's house after Frank Reynolds of ABC broke in with a bulletin during One Life to Live [1]. I deplore the sentiments of people who wanted the president to die.

But as I asked on NRO, does the reader not recognize the same irrational hatred directed at President Obama today on the right that was directed at Reagan back then on the left?

The nine responses I've received answer my question. None of them thinks Obama is hated today the way Reagan was hated back then. As one person stated, "Death wishes for political opponents is something that's almost entirely confined to the left."

I'm a save-the-abortion-rights-of-gay-whales liberal, but I would never make a statement as blinkered as that against conservatives. One of the most foolish things in politics is the belief that your side is reasonable and fair while the other side engages in all of the bad acts. There are numerous examples of Obama hatred today as rabid as the Reagan haters in college who converted the reader to conservatism. There will be plenty of jerks who wish death on the next elected president, too. These folks are easier to find today than in 1981 -- just read any newspaper's poorly policed comment section or the feedback on rabid political blogs.

Left vs. right isn't the only meaningful divide in our politics. There's also ragemonkeys vs. everybody else. If the formative moment in the establishment of your ideological beliefs is the time you heard repugnant things said about the current president, you're just as likely to have become a liberal as a conservative. It just depends on when you heard them.

1: If anyone knows what Brad Vernon told his sister Samantha about Asa Buchanan's late wife Olympia, let me know.

While I agree that becoming a conservative because of how one's classmates respond to a particular incident is dumb, that's not actually what the reader said. He said it caused him to pay attention to American politics for the first time, and to investigate what American conservatism really was. Presumably it was this investigation that led him to be a conservative. His fellow students' reaction to the shooting was merely the catalyst for this investigation.

A very large presumption Doug. Thinking and investigation and spoken of by conservatives, but IMO rarely attempted, successfully or normally.

As one rarely sees conversion stories which run "Right then, I knew that, whatever side I belonged on, it wasn't the one which was poor, it was the one which was rich.", I suggest there is some sermonizing for the choir in these accounts.


By the way, you've got many implicit but unproven assumptions in your logic. For example, even granting an equal number of haters on both sides, it doesn't follow that one is equally likely to hear them (the proof of this is talk radio).

Anyone that thinks that Obama is not hated today anymore than Reagan was back then, by mainstream America, needs to have their head examined. It is however, food for thought.

None of them thinks Obama is hated today the way Reagan was hated back then.


That sentence is 11 words too long.


A CNN source with very close to the U.S. Secret Service confirmed to me today that threats on the life of the president of the United States have now risen by as much as 400 percent since his inauguration, 400 percent death threats against Barack Obama â€" quote â€" â€œin this environmentâ€ go far beyond anything the Secret Service has seen with any other president.


Not content to spin the ludicrous "both sides are equally bad" narrative of the abysmal corporate media, NRO tries minimalizing the reality of the strong reaction against Obama from racist/ nationalists/ militia groups while conflating the ire of the left over Reagan in order to feed into their long running "perpetual martyr" narrative.


The right seem to enjoy a good convert tale. The tale of the 100th sheep who returns to the fold is always a more compelling narrative than the story of the 99 who never left. Having spent an inordinate amount of time in blogworld Spud has noticed the plethora of right wing nom de blogs/ handles that reflect that. Libnomore, FormerLib, RecoveringLib, that typa thing. It's practically a trope by now. Think it all goes back to Paul nee Saul and his conversion on the road to Damascus story. "And yeah the scales fell from mine eyes and I could see".


That all noted, Spud has also noticed a slew of counter stories from the right about how people were once dyed-in-the-wool Republicans/ conservatives who felt that the party had gone too far right to support any longer. These folks have found themselves in the Dems camp pretty much by default. These conversion stories always seem to have more weight to them but that could just be my own personal confirmation bias kicking in.

I just started reading Michael Moore's new book "Here Comes Trouble. " Chapter 1 is stunning in the details of how many right-wing nuts want/have tried to kill/maim/scald him for the crime of making documentaries. Plus Fox reporters calling for his death, on-air, while interviewing him. Plus the venom he got for not supporting the Iraq invasion.

Not to put too factual a point on it, but...


November 1963 was not exactly a high point in the high-mindedness of winger empathy, either. The media of the day did not spend any notable time on the 'glad he's dead' and 'damn mackerel-muncher got what he deserved' comments. And there were a lot of them. At the time, publishing such things in the first place was impolite at best, hardly the fodder of hours of invective and rib-nudging giggles by a cadre of paid clowns -- Cronkite would never have done such a thing -- but those of us that were there remember. The haters haven't changed.

I think we can all agree that one dorm-roomful of students perfectly represents an entire political party.


And I think we can all agree that it's rational for one to form one's entire political beliefs based on the opposite of what a random dozen college kids think.