Anthony Weiner and the Infidelity Police 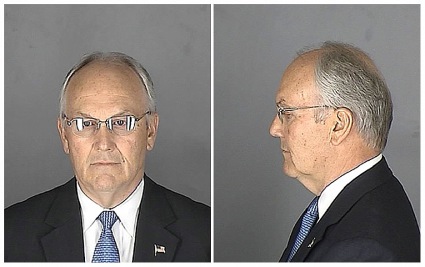 Megan McArdle, a commentator for The Atlantic, believes that it's the valid role of the media to dig into our private lives to see if we've kept our wedding vows:

I don't think that cheating on your wife, or lesser betrayals like sexting, are minor marital pecadillos, of no more public interest than whether you remembered to pay the gas bill or unload the dishwasher. I don't think it's the government's job to punish infidelity, but that doesn't imply that society has no interest in whether people keep their vows. Marriage is a valuable social institution. There are good reasons that society should buttress it. ...

[T]here's something a little too fifties about the "All men do it, so why should we care?" approach to this. I'd like to think that enforcing the norms which hold that infidelity is really, actually wrong is worth taking a few hours out of a slow news cycle.

Before the next politician gets caught with his pants down, there's something I'd like to put on the record. After many years of being a moralistic scold, I have lost faith in the idea that this kind of stuff has any bearing on whether someone is a good leader. A public figure can be admirable in public life and scurrilous in private. As long as the sex involves consenting adults and the person would not deny others the pursuit of the same happiness, it's none of our damn business.

It's ridiculously intrusive for McArdle to think that there's a compelling societal interest in policing marital fidelity.

Her premise is founded on the assumption that extramarital sex is universally wrong. I think most of us would say that it is, especially if our partner or our relatives are in earshot. But if you read a sex advice columnist who encourages complete candor, like Dan Savage or Dear Prudence, you find numerous people who've made different arrangements.

A marriage operates by its own rules, most of which outsiders never learn -- even if they're close to the couple. One of the drawbacks to holding married people to account is that we don't what these rules are, and finding them out would be incredibly invasive. When they file their first story on a sex scandal, how do reporters know they're not maligning a person for sex outside of marriage whose spouse accepts the arrangement and engages in it too? There are people who do that sort of thing -- and some of them aren't even Europeans.

There's a funny, profane speech on YouTube by Savage, who thinks an insistence on absolute lifelong monogamy breaks up marriages that could otherwise thrive.

"We need to think of monogamy the way we think of sobriety. You can fall the ---- off the wagon and sober back up," he says. "I'm a deeply conservative person. I believe these things because I want people's marriages to survive for the long haul."

This is from a guy who has spent the last 20 years hearing from people about their actual sex lives. It should come as no surprise that he takes a more tolerant view of sexual transgressions than media talking heads who tut-tut in disapproval with each bimbo eruption.

Expecting the media to dig into the fine print of somebody's marital contract is disturbing. McArdle and her husband Peter Suderman are both journalists at prestigious national publications whose marriage was covered in the New York Times, so they're limited public figures. If they become embroiled in a sex scandal, would McArdle agree that it's my job as a journalist to buttress marriage by subjecting them to a thorough probing?

McArdle's argument that the media has a valid role enforcing societal norms is even worse. Homosexuality has been far outside the norm until recent years. Was this ever a sufficient justification to reveal that a public official was gay?

If you have any empathy at all, it's excruciating to see the press take a blow-by-blow look at somebody's sex life. I cringed at questions Rep. Anthony Weiner (D-N.Y.) was called to answer during his press conference Monday. As much as he invited that treatment by lying, I think many people would lie to prevent private sexual conduct from being scrutinized, especially if there's some guilt involved. Everybody has aspects of our sex lives we wouldn't want to explain to the world on live television. For most of my late teens I made sweet, sweet love to a throw rug I nicknamed Valerie Bertinelli.

It is not about his infidelities - I don't care who he sleeps with. It is about his character and his ethics of which he has neither. He is also a liar - we see how being a leader and being a liar works out - just look at the mess we have in this country with that lying sack of you know what - Obumble.

I guess people feel they have to impose some standards on their politicians, and since they've already decided that it's perfectly acceptable for a politician to order (or even participate directly in) any conceivable crime up to and including mass murder and torture, there's not really much left.

Unlike the author of the article, I DO believe that someone's honesty - or lack thereof - in their private life is relevant to their public life. If someone cheats on her or his spouse, they are dishonest by definition. If they deceive the one person they have vowed to "love, honor and cherish" how can we, mere anonymous voters, expect that person to keep any of the promises they have made to us? Compartmentalization of morality is fictitious. It reminds me of girls in junior high who gossip about all the other girls but assure each other they would never do the same to each other. (Actually politics in so many ways is reminiscent of junior high. But I digress).
Anyway, as others have observed, this isn't about Weiner's (stunningly pathetic) sex life. (Although he has given a powerful reminder of why fantasies should remain unshared. There is a reason our thoughts are private). He lied, repeatedly and strenuously and had his minions cast aspersions on reporters pursuing the story. Here is a powerful man using the media to outright lie. Whatever excuse might be made for his sexual inclinations (and, for the life of me, I can't think of any. He's a grown man for goodness' sake, not a teen in love with a rug. A rug??), there is no excuse for him to lie. There just isn't.
For those who point to real or imagined "crimes" of other politicians, I would ask how bad behavior of one person excuses the bad behavior of another person? That never did make sense to me. Unlike some, I roundly condemn ALL politicians who lie, regardless of gender, sex, party, ethnicity or any other factor folks use to excuse "one of their own" while gleefully crucifying "the other guy."


I wish my fellow Republicans would stop telling all us consenting adults who we can/can't have sex with and how. For starters, it's hypocritical (Sens. Craig, Vitter, Reps. Foley, Gingrich etc etc etc) and worse, it's un-Republican and un-American.

When even Ed Schultz calls out the morally bankrupt left, you know you have a problem.

For Christ's sake, Weiner is a New Yorker.


He should have just been up front and said something like:


"Yeah, I sexted various women I'd struck up online acquaintances with, so what?


It's none of your business, really, but my wife is a lesbian and in a committed relationship with Hillary.


I'm bi, and Aaron Schock and I like to twist each other's nipples.


You got a problem with that?


Also, I send my dirty underwear to this anonymous Republican creep who calls himself "Zeitgeist". He has some kind of weird fixation on Democrats and me in particular.


(I stole part of this from a spoof comment on Gawker.)

GUESS YOU FORGOT ABOUT BILLY BOY CLINTON. HELL HE'S THE PRESIDENT OF THE LIAR'S CLUB - YOU LOSER!


Shhhh, no need to yell, we can all read you.

Character is important. As Machiavelli noted:


There is no surer sign of decay in a country than to see the rites of religion held in contempt.


If a man's own wife can't trust him, how can anyone else?


And finally,
a nation that has unvirtuous men leading her can only be led to ruin. Perhaps that is the intent.