Andrew Breitbart Was Right About Weiner 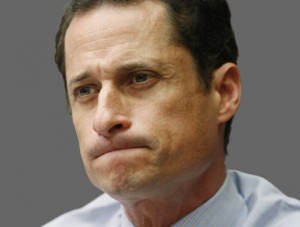 Today, Rep. Anthony Weiner (D-N.Y.) admitted that he sent a picture of his bulging crotch over Twitter to a female college student in Seattle and accidentally made it public. Obviously, my earlier post was completely wrong. This is my correction.

At the outset, I'd like to make it clear that I have made terrible mistakes that have hurt the people I care about the most, and I'm deeply sorry. I'm deeply ashamed of my terrible judgment and actions. I am deeply sorry for the pain this has caused my wife, a newspaper journalist who hates reporting errors like Charlie Sheen hates interventions.

When I started looking into this scandal, I found numerous reasons to doubt the veracity of Dan Wolfe (PatriotUSA76), the Twitter user who claimed to have found the photo posted by Weiner before it disappeared. Wolfe's Twitter account -- before he deleted it -- demonstrated deep obsession and irrational hatred for the congressman and his wife Huma Abedin over a period of six months. Based on my understanding of how Twitter works, I did not believe the story he told about finding it.

When Breitbart's site reported the original story, he had not checked out Wolfe at all, as he admitted to Tommy Christopher of Mediaite in a phone interview:

Once we published our story about Dan Wolfe, Andrew called me again, and it was clear from the conversation that he had genuine concerns about Wolfe as a source, and that he had been unaware of his prior activity on Twitter.

Because Wolfe's background was so dubious, Breitbart associate Lee Stranahan has been investigating Wolfe for days. He found numerous reasons to doubt him. On Saturday, Stranahan wrote:

Is Patriot a man or a woman? A group of people? ... Nobody I've encountered except "Patriot" knows. That is a fact. Nobody knows. There's a reason for that.

The facts gathered so far tell me one thing I'm sure about: Patriot is a liar and a manipulator. I'm 100% sure on that.

None of this means that Rep. Weiner isn't hiding something.

Like he did in the Shirley Sherrod incident, Breitbart did not begin to check out his source until after running his original story and talking it up on every cable news channel that would have him. This is not how journalism is supposed to work. But as I read all the coverage of this scandal the past weekend from news sites on the left, right and middle, it seems to be the emerging standard. First get it out. Then check it out.

Though he demanded (and got) an apology today from Weiner, Breitbart has never apologized for his July 2010 story that called Sherrod a racist based on maliciously edited video he received from a highly questionable source.

I think he should have apologized for that, as I am now apologizing to him for calling his Weiner piece "a bogus story being pimped by the biggest charlatan on the right." The conclusions I reached were proven untrue.

I am sorry for my enormous boner.


Bwahahahahaha, gotta love a rouge Weiner, see ya around Tony.

Because you were right about Weiner, I will let you back on the Retort. Log in under your last Zeitgeist account or email me for the password using the account's email address.

Not that is a solid deal, I was going to make that bet with you, (me going away forever vs. re-entry) but it unraveled to quickly. Thank you.


I thought the Breitbutt was up to the old same ol'. At least when the truth comes out, and you are on the other side of it, you at least admit it.


(hey I want back on Drudge as well!)

What an odd apology, Rogers. By bringing up a completely unrelated issue and complaining more about Andrew's behavior, you come off as not apologizing at all, despite your words.


You made an honest mistake and you're a good person to admit it.


I think you over-apologized though.


Breitbart cried Wolfe one time too many :-)

How ironic Tony was undone by his own personal by his internal demons and not his firebrand politics...

Hey no need to bag on Breitbart for something that occurred a year ago. The issue currently is what Weiner did this past week. Breitbart went on with releasing the photos sans one because the liberal media and bloggers like you continued to attack Breitbart w/o doing any research on your own.


Weiner would have never come out with the truth if Breitbart did not release the photos. Weiner's move now is to resign before everything gets real ugly.


The Democrats want him out and he is only making things worse for his party by fighting to hold his seat in the House. That man is sick and needs help. He is unworthy to hold office and has lost the public's trust due to his lying press conferences and pressers this past week.

I would let it sink in what a scumbag Weiner is really is, basically he is a sexual predator, sending shots of his penis to young girls.


Watch this and see what a total human rat and scumbag this guy is....

There's nothing "sick" about Tweeting sexy pictures. But you over-30 prudes don't get it. The world of my generation is a lot less uptight. And it won't be too long before we bury all you puritans and use the whole planet for our awesome party.

Funny how FoxNews and the rest of the GOP are so opposed to what consenting adults (Weiner and his online Tweet pals) do in the privacy of their own homes. I thought the Dems were supposed to be in charge of the Nanny State.

I would let it sink in what a scumbag Foley is really is, basically he is a sexual predator, sending messages about his penis to young boys.

I would let it sink in what a scumbag Lee is really is, basically he is a sexual predator, sending naked shots to young girls.

I would let it sink in what a scumbag Craig is really is, basically he is a sexual predator, soliciting gay sex in airport men's rooms.

So far every one of Weiner's cyberhoochies has said it was consensual. While you may not approve of him sexting people, they did. I think it's silly to call him a predator for it.


I think the most damning thing Weiner has done, other than to lie, was to admire the size of his own penis surreptitiously on the Rachel Maddow Show.

This is so pathetic. First off, Breitbart did release 100% of the Sherrod video. Blinded by their political beliefs the author and his ilk will go to their grave refusing to admit that. Video is always edited to show the relevant parts of the story, but of course it is only done with a malicious intent when conservatives edit copy.


As far as Dan Wolf or any other "source" in a news story, one must take into context what they learned and are following up from that source. It wasn't a piece of information Dan Wolf was sharing made up out of whole cloth in which the foundation of the story was dependent upon. He simply re-tweeted something from Congressman Weiner. The picture in the re-tweet clearly was from Weiner's YFrog account. Dan Wolf's motivation or credibility is simply not relevant in this context. In this context, Dan Wolf is part of the story more than a source for the story.


The author would have us believe that a "true reporter" would have first investigated Dan Wolf, seen that he was partisan with negative opinion of Weiner and his family and consequently dropped the whole story. I do believe that is more of a projection of his wish for an alternate sequence of events for the past week and a half.

I would let it sink in what a scumbag Schwarzenegger is really is, basically he is a sexual predator, impregnating a subordinate maid in his own home..


Gov. Schwarzenegger is one sick dude...

Video is always edited to show the relevant parts of the story, but of course it is only done with a malicious intent when conservatives edit copy.


The Sherrod video was maliciously edited to make her look like a racist. The context that would have shown she was describing a personal tale of redemption was removed. There's no way that wasn't the intent of the editing.

Why's Wiener a "predator"? The woman who released the pics said she started flirting with Wiener first. This is pretty much how relationships work these days - people meet online, they flirt, they exchange pictures.

The Sherrod video was maliciously edited to make her look like a racist. The context that would have shown she was describing a personal tale of redemption was removed. There's no way that wasn't the intent of the editing.


Roger, I watched the whole un-edited video. The missing "context" that the left cried about made her seem more like a racist and not less. Tell me how a discussion of the color of anyone's skin is relevant for someone in that position?

It is unfair to take a story of personal redemption and completely edit out the redemption. The full video did not make her seem more racist. It showed that she learned from her mistake. The white farmer the tale was about continues to speak highly of Sherrod. It is tedious to keep having to repeat these points to people who spread the same false information over and over.

So, when someone on the left acts in a racist manner, it's just a minor "mistake." You know very well, that if the situation was reversed with a white Republican official, the admission would have been an immediate call for their head. Racism is racism and should be expunged. It matters not if her victim forgave her or not. Given that she was still in a position of power over him and that his livelihood was in her hands, I can see why.

The farmer didn't just forgive her -- Roger Spooner and his wife credit Sherrod with saving their family farm 20 years ago and consider her a "very special lady."


PAUL: "Republican official racism should be Given power. I can see why."

Half believed you - until your final sentence. Here's one brother won't bother with your nonsense anymore.

After reading the comments from both sides of the aisle, I can't help but feel disgusted with the way in which you are all acting. I am fed up with the rhetoric and shit throwing from all of you. Why can't Americans partake in civilized, cordial discussions, without having to resort to hostile and aggressive comments?