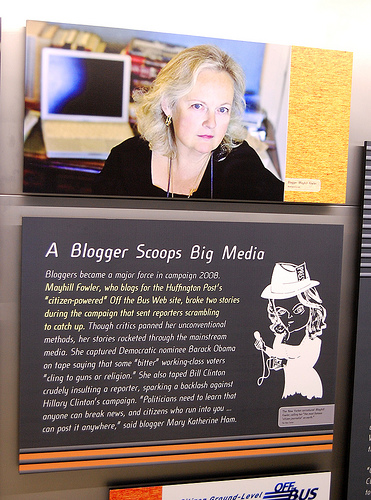 When I visited the Newseum in Washington last year, I had a pang of journalistic envy over a display honoring Mayhill Fowler, the blogger who broke the "clinging to guns and religion" story about Barack Obama during the 2008 presidential campaign. Fowler was one of the Huffington Post's legion of unpaid citizen journalists, covering the race like a swarm of locusts.

Fowler burned her bridges at Huffington this week, writing a public resignation letter after she couldn't convince the site's editors to start paying her for journalism.

I would not expect to be paid for punditry. The Huffington Post business model is to provide a platform for 6,000 opinionators to hold forth. Point of view is cheap. I would never expect to be paid there when the other 5,999 are not. However, the journalism pieces I have done in the past year seem to me as good as anything HuffPost's paid reporters Sam Stein and Ryan Grim produce. Why do they get money, and I do not?

She's getting roughed up in the comments, particularly by journalists who think the work-for-free crowd is making it impossible for them to earn a living. But it's not like it was ever easy to establish a print journalism career. The entry level pay is horrendous. Back in the '80s, I had a college friend whose first newspaper job paid so little he lived out of his car. Another was offered an internship for Nightline that didn't pay a cent, despite the fact the show was making millions for ABC.

Reading Fowler's story, I am struck by the amount of time she continued to write for Huffington without compensation. She gave them two years of free labor after she established her name as a political reporter, but it doesn't sound like she was ever treated well by the site despite bringing it considerable media attention.

If you want to see how much Huffington Post values citizen journalists, the response to Fowler by site spokesman Marco Ruiz makes it pretty clear:

Mayhill Fowler says that she is "resigning" from the Huffington Post. How do you resign from a job you never had?

Arianna Huffington praised Fowler in an interview this year, saying that she "showed how much a citizen journalist could influence a national election."

In the same interview, Huffington pointed out that her site has a valuation of $100 million.

Once Fowler valued herself higher than $0, she became a nobody to them.

There's a Kachingle for that ;)

Where is my check?

I think the best analysis of breaking-the-story was in this article:


"Put on a citizen hat, and donate enough money to be sure that you get invited into private affairs as a citizen - something no journalist I know would do. Then, once inside the door, put on the journalist hat and report private remarks! And finally, to absolve yourself of the standard journalistic responsibility of going to aides and getting on-the-record quotes about the comment, which most any working journalist would do, toss the journalist hat back in the closet and become a citizen again! Nice work if you can get it."


And the $100 million / $0 valuations shows very starkly who is really benefiting.

Fowler admits in her book that when she got the quotes that embarrassed Bill Clinton, her other scoop during the 2008 campaign, she hid her digital recorder in her bra:


"Fowler recounts how she had another bout of conscience about her role, because she had failed to tell Clinton she was a reporter. And her book reveals another oddity -- that she had her digital recorder 'stashed' in her bra during the interview. (She said she had her hands filled with cameras.)"


She also intentionally misled reporters about this fact.

So, she doesn't like working for parasites. I wonder if she will change her mind about Socialism now.

I am not a fan of Ms. Fowler. She's unethical ...I find her deliberately vulgar....she attacks without actual facts or even reason....facts mean nothing to her. Anything authored by Fowler is repulsive...I try to avoid her blogs.
Lately I'm not a fan of Huffington post or Ms. Huffington.
But...this is about Fowler.....about her I have this much to say.....if...she were any good someone would have hired her by now.