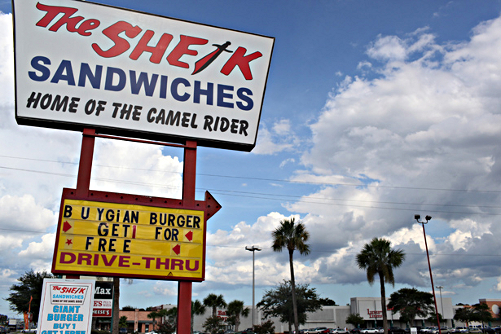 Aman Ali and Bassam Tariq are spending Ramadan on a 12,000-mile road trip, visiting mosques across America and writing about their experiences on 30 Mosques in 30 Days. They were interviewed by NPR at the start of the trip:

... a lot of Muslims that live in small communities across the country, whether it be the Midwest, down South or even on the West Coast, they might feel, "I'm the only one going through this struggle. I'm the only kid in school that has a funny name. Or I wear a headscarf -- I'm a Muslim woman -- and I get dirty looks and, you know, people make me feel uncomfortable."

So this is a way to show that we're not the only ones going through our struggles ourselves, you know. Ramadan is a month to bring people together.

One of the first mosques they visited was the Park51 mosque two blocks from Ground Zero.

They made a stop last week here in Jacksonville at the Islamic Center of Northeast Florida on the city's southside.

As they drove to the mosque, they spotted a "hilariously racist" sign for The Sheik, a sandwich shop that describes itself as "Home of the Camel Rider." I've seen that place for years but been afraid to eat there. A CNN.Com reporter accompanying Ali and Tariq was more courageous:

Wayne [Drash] isn't fasting so he decides to go inside and order this place's infamous Camel Rider sandwich. He walks outside showing me what's the sandwich: ham, salami, and American cheese.

"I think this is probably the most American sandwich that you could possibly eat," Wayne says.

If you're as disgusted as I am by the round-the-clock media narrative that Muslims are anti-American subversives who attend "terror mosques," check out Ali and Tariq's excellent adventure.

We should't have any damned mosques in America much less 30.

I am glad at least some people are doing something to lessen the widespread racism and misunderstandings towards to the muslim religion.

We all do respect each and everyone's way of worshiping and yet there is no one that can dictate whether we should or we can build mosque for wherever any other people can build houses of worship. Though it can never be denied that religion had been a barrier in some aspect, some literally does not agree in some point but still freedom to worship exist. Since it is granted that Muslims have absolute freedom to religion that they can build their mosques in non-Muslim country and they are free to win over and boost their religion in every country all over the world. We understand it is all about other religions, Buddhist, Hindus, Jews, Christians and other religions to have and give us the complete freedom of religion same as to the rights that Muslims do enjoys in our own countries.