Do We Believe in Freedom of Religion or Not? 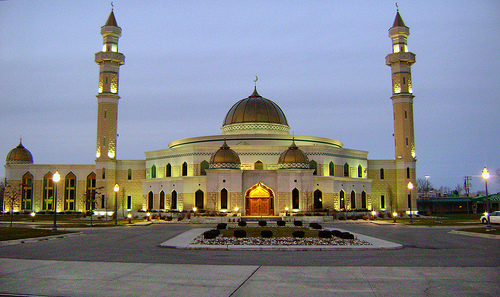 I am one of the 52 percent of Americans who believe that Muslims should be able to build mosques wherever any other people can build houses of worship.

That number should be 100 percent.

When I first heard about the mosque two blocks away from Ground Zero, I thought it was a non-issue. Two city blocks is a long distance. It's not a "Ground Zero Mosque" -- no one called the former tenant the Ground Zero Burlington Coat Factory. The strip club around the corner is not the Ground Zero Strip Club. The community and zoning authorities in Manhattan overwhemlingly approved the project and Faisal Abdul Rauf, the imam in charge of the project, is so respected that Presidents Bush and Obama have sent him to do outreach to international Muslims.

It has been extremely disheartening to watch anti-Muslim fervor sweep the country fed by Fox News, the New York Post and other right-wing media. The people who have fueled this controversy the most, such as the blogger Pamela Geller, are motivated by a fierce hatred of Muslims. They've been telling blatant falsehoods to stir outrage about the project, such as the untrue claim that it was scheduled to open on Sept. 11, 2011. (To give you an idea of Geller's credibility, this frequent Fox News guest has used her blog to spread the claim that President Obama's father is secretly Malcolm X.)

A lot of Republican politicians have opportunistically jumped into this issue, feeding off the media-generated outrage. To my great disappointment, a few Democrats such as Senate Majority Leader Harry Reid have joined them.

There are more than 1.1 billion Muslims in the world and perhaps as many as two million living in the U.S. They're neighbors, coworkers and friends. They serve in our government and in our military. They can be found among the dead on 9/11 and in our national cemeteries. The fact they've been able to worship freely here without interference has been a testament to this country's deep respect for religious freedom.

That may be changing.

The controversy over this mosque has inspired protests against other mosques around the U.S. and legitimized the idea that the U.S. is at war with Islam. In Sheboygan, Wisc., some Muslims who fled persecution elsewhere are afraid to worship here.

If you are one of the Americans who thinks Muslims are the enemy, you're giving Osama Bin Laden the propaganda victory he hoped to achieve with the 9/11 attacks.

Photo credit: The photo of a Detroit mosque was taken by Just Us 3 and is licensed for reuse.


I wouldn't have been surprised if 10% or 20% had opposed it -- there are a lot of closed-minded people living in their own little worlds, toeing the party line and happily drinking the party Kool-aid. But 48%? That really surprised and disappointed me.

There's a difference between can and should. They can build a mosque there; the question they need to ask themselves is this: will putting one up be a positive PR event, or a negative one?


Based on the reaction, it seems pretty clear to me that building a mosque there will be a negative PR event.


Let's take a hypothetical: say a very anti-gay Christian group wanted to build a new church in central San Francisco - perhaps the nutters from Westboro. I have serious doubts as to whether anyone on the left would be talking about religious freedom.


Like most things, this depends on whose ox is being gored.

I don't have an opinion on can vs. should. Would I care if Catholics or Scientologists or Rastafarians were building two blocks from Ground Zero? No. I don't care that Muslims are either.


If an anti-gay Christian group bought property in San Francisco and secured the zoning permissions necessary to build there, I wouldn't care about that either. It's a free country. People ought to be free to practice their religion on their own property without busybodies trying to drive them out.

You don't care about can and should, but it seems that lots of other people do. Here's the question: will putting that mosque up in that location make Americans more likely to be tolerant towards Islam, or less likely?


IMHO, this really isn't a federal matter, or even a NY State matter. It's strictly a local NYC issue. What I'm trying to point out is that the alleged goal of the people putting up the mosque - "interfaith healing" - is now an unlikely outcome. From a strictly PR standpoint, they would be better off building elsewhere.

You don't care about can and should, but it seems that lots of other people do.


If the media had not inaccurately dubbed this the "Ground Zero mosque," I don't think lots of other people would care. As you say, it's a local issue.


Whether the mosque in the long run succeeds or fails as an interfaith effort is up in the air. There will be a new outrage of the moment to distract everybody any day now.


By the time they actually raise $100 million and build the thing, it will be old news.

@James Robertson - This question has always bothered me. That is, say you have an objectively good honest goal (i.e. following a path of peace and love through Islam as you see it). A bunch of shameless liars and demagogues smear your project. Then third-parties say something like "We know you are honest and true. But politically, the liars and demagogues have tainted you in the public eye. Therefore, since your project is now poisoned to the general populace because of the lies and hype, you should know it can't succeed, and not try any further."


While I can follow the logic, it strikes me as there's something profoundly wrong there, on many levels. And not just morally. It's encouraging destructive forces, feeding them strength from hate.

Seth, I think you are absolutely correct with your comment and I am troubled that Islam is equated to terrorism.


But I would love to hear more clearly exactly how those folks who live there and who likely lost loved ones on 9/11, and who would pass the mosque on an almost daily basis, feel about it. Because I think there is yet another way to view it.


If seeing that mosque there would bring them pain on a daily basis I would go and build my mosque elsewhere. I have no wish to add to their grief. If on the other hand the mosque would somehow help heal their grief, than I would support the building of a mosque there.

Let's say that the mosque in the old Burlington Coat Factory wasn't going to be a mosque at all but -- as Fox News commentators have predicted -- a planning center for terrorism. Wouldn't that be the best possible thing that could happen for our nation's security?


1. We'd know exactly who the terrorists were -- we could just watch who entered and exited.
2. It would be extremely easy to infiltrate their organization. In no time, we'd know all of their plans.

It's just those old teapotters giving the American people another wedgie. As the drama unfolds, the scene I've enjoyed most is the entry of Bishop Dolan and his kind offer to mediate, to help the downtown muslims find a compromise. "Say what?" I said to myself. "Compromise? Why? And with whom?" I'm given to asking myself rhetorical questions. I think many if not most religious people are kind of cracked if they profess faith in a metaphysical dimension, particularly one that posits life after death. But I respect the community aspects of worship groups and the comfort so many people receive from their "faith." It's easier for me to put the knock on Scientologists than Christians, Jews, or Muslims, but ultimately, until New York City gets its wits about it and mandates conversion of all religious facilities to fast food restaurants and animal shelters, I'd have to defend the Hubbard-ites rights to build a giant e-meter down on the Battery if they could get the permits.


I'm circling in on a serious point here... the controversy about the downtown muslim gathering place has been fabricated to divide people and to soak up bandwidth, crowding out topics more important and deserving of discussion. I hope that someday we can learn to ignore this kind of nonsense.

And it looks like the latter possibility that "the mosque would somehow help heal their grief" is a possibility."


CNN is reporting the following.


Some family members of 9/11 victims will rally Wednesday in support of a controversial mosque and Islamic center that is scheduled to be built near New York City's ground zero.


Their group, called September Eleventh Families for Peaceful Tomorrows, will also be joined by at least 40 religious and civic organizations, and is expected to announce the creation of a coalition called New York Neighbors for American Values. The coalition's goals include support of "religious freedom and diversity" and the rejection of "crude stereotypes meant to frighten and divide us."

There's a current mosque located two blocks from the proposed site. Should we close that one down? The idea we're even talking about this is crazy.

I agree with you, America is the real terrorist and what happend on 9/11 is Americas fault, not Muslim fault, Muslims had nothing to fo with 9/11, Michael Moore proved this beyond any shadow of doubt. Everyone knows that except Fox News who probably made up the 9/11 story to bring down Islam. You and I think alike and I respect you brother Al-Salam Malakum, peace be unto you under Ala our god. Keep doing good works and writing, we will conquer America, yes we can.