How I Learned to Stop Worrying and Love the iPad 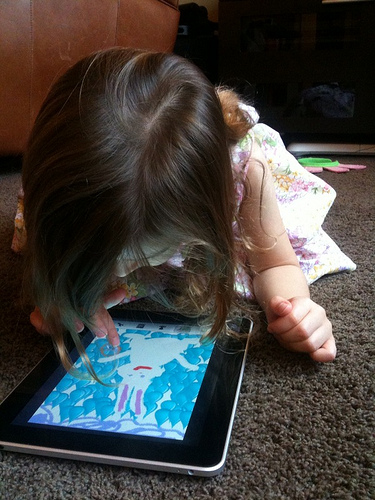 Like Cory Doctorow and some other longtime computer hackers, I've been thinking of the Apple iPad as a dire milestone on the road to a restricted computing future where giant corporations control everything we do on our devices -- and the only decent job that former programmers can get is to hunt and kill replicants.

Believing this has helped me resist the urge to buy an iPad.

Unfortunately, Greg Knauss has written a blog post that completely demolishes this sentiment:

Simplicity has a purpose, and complexity -- "hackability" is just a form of complexity -- has costs. The story of technology over the course of the past 20 years is the expansion of one at the expense of another. It's been more than a fair trade, despite detours and disasters and greed and stupidity. ...

I have no doubt that the computing device that my kids will use is going to look more like the iPad than my beloved Atari 400, and that they won't care one damned bit about how they can't solder a keyboard into it.

I recently broke up with Microsoft Windows after 15 years and moved to Ubuntu Linux, so my main desktop environment is gloriously free, open source and hackable all the way down. But Ubuntu 9 runs so well and meets so many of my working needs already that I almost never hack anything. I just like knowing that I can.

Looking at a picture of MetaFilter's next generation doodling on her iPad, it's ridiculous to deny the creative potential of a device that makes so many new interactions possible.

Credit: The photo of the Apple iPad doodler was taken by Matt Haughey and is available under a Creative Commons license.

As long as she always wants to draw inside the lines of an app somebody made that got approved by Uncle Steve.

I can see your point, from my perspective as a hacker.


How many things could a non-hacker want to do on an iPad that won't be available in an approved application? And how will those unmet needs stack up next to the many things that are possible for them to accomplish?


Different generations have wildly different expectations for their media and computing.


When my oldest son was young enough to go to his first movie in a theater, he was sorely disappointed when he got home and couldn't watch it again. His movie experience was defined by Tivo and videotapes, where if he wanted to see Herbie Goes to Monte Carlo 100 times (and he did), it was immediately available to him.

Sure, and I'm not as hard-assed about the whole thing as that comments sounds, but as a programmer I'm so suspicious of restricting the ability of other people to join the guild. Like we've got all the imagination and talent we need working on code already. It's a higher barrier to entry than a normal computer and providing a sandbox circumscribes the imagination of the kids playing in it.

Greg's post seems like a pretty gross distortion of what Cory was saying. I don't think Cory is saying that devices need to stay complicated and bad for the sake of openness. He's saying that open systems always win out (in the market, not by famous blogger fiat) over closed ones because they allow innovation to happen unhindered. As you've discovered with Ubuntu, open systems don't have to be any more complicated or lower quality than closed ones. The trade-off that Greg posits doesn't exist.

I'm sure google will have a tablet out in less than a year. It won't be as polished, the apps won't be as nice, but those that don't want to play in apple's sandbox can sleep soundly. For me, until I want to do something that I can't do because Apple won't allow it, I'm okay with the tradeoff.


I find it dead on, and his post comes off as the old guy telling the kids to get off his lawn.

He's saying that open systems always win out (in the market, not by famous blogger fiat) over closed ones because they allow innovation to happen unhindered.


If he thought that open systems always win, why is he arguing so passionately that people should not buy an iPad?

I too read those posts by Doctorow and Knauss, two of my favorite bloggers. Not to self-promote, but I took a stab at articulating why I think both of them miss the point on my blog, which is in the link attached to my name on this comment.


The short if it is that I really think Apple has framed this debate in an awful way that promotes idealist vs. pragmatic debates like this - so we either have to choose to hate iPad and reject it with all our might, or accept that Apple was right all along. Neither, I think, are a healthy course of action.

If he thought that open systems always win, why is he arguing so passionately that people should not buy an iPad?

I would hope as a public service. A warning not to get involved in yet another locked-down system a la AOL and iTunes DRM.


There's a debate to be made here, but this isn't it. Come on, AOL? I guess if you throw enough shit at the wall something might stick (see: repubs on healthcare), but that comparison is a stretch to put it mildly.

I came across this by a reTweet, and did not realize that this was the personal blog of the guy who wrote the book I am using to try and learn Java. Today I was on your site (trying to learn more about Java), saw the link, and realized the coincidence.


This post has made it to ZDNet and Tech Republic, where I posted the comment at this link:


Just because a Gorilla or a 2 year old can easily master a device, does not mean you should give in to the urge to resist buying it. In fact, maybe it means the opposite.

Thanks for picking up my book.


You asked, "What exactly is so impressive of a computer that is so simple that even a 2 year old or a Gorilla can use it?"


It's impressive because an intuitive well-designed device could open up possibilities for the non-technical and people like that two-year-old. Not every device should cater to the early adopters and uberdorks like myself.