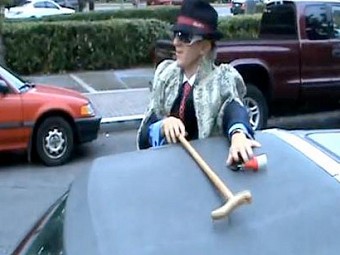 Clark Hoyt, the ombudsman of the New York Times, has finally figured out that Andrew Breitbart and James O'Keefe lied to the media about the way O'Keefe was dressed during the ACORN sting videos last fall:

... O'Keefe almost certainly did not go into the Acorn offices in the outlandish costume -- fur coat, goggle-like sunglasses, walking stick and broad-brimmed hat -- in which he appeared at the beginning and end of most of his videos. It is easy to see why The Times and other news organizations got a different impression. ... The Times was wrong on this point, and I have been wrong in defending the paper's phrasing. Editors say they are considering a correction.

The Times reported several times that O'Keefe was wearing a ridiculous pimp costume during the visits to ACORN offices, an impression furthered by O'Keefe when he wore it during an appearance on Fox News.

As the story was first getting national attention, Breitbart wrote in his column for the Washington Times that O'Keefe was dressed that way:

When filmmaker and provocateur James O'Keefe came to my office to show me the video of him and his friend, Hannah Giles, going to the Baltimore offices of ACORN -- the nation's foremost "community organizers" -- dressed as a pimp and a prostitute and asking for - and getting -- help for various illegal activities, he sought my advice.

As Breitbart had to know at the time, since he had viewed all of the videos and was publishing them on his Big Government web site, O'Keefe was dressed conservatively in a button-down shirt while talking to ACORN workers. He only wore the pimp costume in footage shown of him getting out of a car, which was filmed separately and edited into the videos to mislead viewers.

Telling people O'Keefe wore that pimp getup helped give the story wider media attention and made ACORN workers look stunningly stupid for not seeing through the ruse.

Dig into any story pimped by Breitbart and you'll catch him spreading half-truths or brazenly false information. Though he employs the trappings of journalism, he engages in practices that no professional journalist could get away with at a reputable organization.

In May 2001, the Drudge Report ran a story that quoted Breitbart and chided the New York Times for not covering Sidney Blumenthal dropping his libel suit against Drudge:

"What the NEW YORK TIMES is doing with its sin of omission concerning the Drudge case is no doubt a form of libel of its own, corporate news slander of the highest degree," said Professor Emeritus Andrew Breitbart of the Cashmere Institute of Media Studies.

The Cashmere Institute of Media Studies does not exist. It's a phony organization named by Breitbart as an in-joke that would be spotted by his personal friends. Breitbart was editing the Drudge Report at the time, and he either quoted himself or Drudge quoted him.

When I was a newspaper reporter, I would have been fired if I pulled a stunt like that to inject my opinion into a story. But Drudge and Breitbart have the good fortune to work in online agenda-driven journalism, where no one is ever held accountable for being wrong. Breitbart lied back then, lied about the ACORN sting and will probably lie in furtherance of the next scoop he peddles to the mainstream media.

He can't be trusted.

I wonder how long it will take the Times and the rest of the major media to figure that out.

Lefty idiots lie all the time about things far more important than what someone wears, such as whether a person is a racist. Nice try. Long live Andrew Breitbart.

"Lefty idiots" immediately denounce anyone within their own community that does lie. It's called integrity, something neither you or Breitbart have.


Way to go supporting someone that obviously lied and has yet to admit they lied. Let me guess you're a big Bush supporter even though you know he lied to get us to go to war. It doesn't matter though, ideologues seldom need face reality when it contradicts their ideologies.

Amazing "moral" standards from the same leftists who edited the Rodney King footage and ran and re ran it in an effort to inflame racial hatred,The Los Angeles Times has put an unusual spin on a news item regarding a series of paintings popping up near Echo Park (I spotted one near UCLA in Westwood). These posters read: ACORN Funded Prostitution Zone. The L.A. Times is not amused.
Ok, so these posters are critical of the Left's beloved ACORN. But what about community activism, free speech and the power of art? Here is just what they claim to want: community activists voice their opinion. They show their disgust over child prostitution. No, no, no a community activist would never break ranks and criticize one of their own, so they must not be real members of a community who are taking real action about something which concerns them. Their punishment? They are labeled "conservative" and "right wing" and summarily dismissed.
When for years Leftist propaganda was smeared all over the streets of Los Angeles by "artists" funded by billionaire George Soros and Planned Parenthood, the L.A. Times characterized it as "art." Who can forget such classics as "Bush Lied. People Died" and Dick Cheney portrayed as Satan?
James O'Keefe and Hannah Giles deserve the Pulitzer Prize for their expose of ACORN's deplorable actions. They have saved the American taxpayer millions of dollars and put on notice other such nefarious organizations. The L.A .Times writers are too slothful and intellectually dishonest to pursue this kind of story. No longer do such journalists seek the truth; they simply regurgitate stories that perpetuate their belief system. Perhaps they are angry at being scooped (along with the N.Y. Times, MSNBC, Katie Couric, etc)? No, that can't be right. That would mean that they actually care about informing their readers of the facts.
The L.A. Times is famous for promoting what they call "immigrants rights." Of course, they are dishonest even in their terminology. What they constantly blather about is illegal immigrants rights, but don't expect them to call it as such. Even in pushing their own agenda, they are inconsistent. The ACORN worker had no problem giving information about how the purported pimp could exploit El Salvadorian girls to work for him as prostitutes. Shouldn't the L.A.Times be excoriating such deplorable abuse, instead of claiming that ACORN is somehow (logic be damned) a victim? So much for immigrants rights. So much for brown power.

Ha Ha Ha Look at huge misrepresentations on any given day by liberals! I am surprised a liberal even has the intellectual capacity to discern an inconsistency in a factual detail like this in fact! (Yes, I know it is a matter of motivation - when it serves your interests it is OK to dress up the facts a little, now, isn't it?)

... when it serves your interests it is OK to dress up the facts a little, now, isn't it?


That's exactly the point you are making by refusing to condemn Andrew Breitbart for lying to achieve his goals.

Wired had a good story about Breitbart "hacking the media" this month: http://www.wired.com/magazine/2010/03/ff_andrew_brietbart/

Give me a break... Be part of the solution instead of part of the problem. If all you have to do is nit-pick Breitbart and Okeef instead of seeing the real problems within ACORN, the Old Media and the corrupt and evil administration in Washington right now then you certainly need to get a life.

HE SHOULD BE IN PRISON!!!


Agenda-driven ideologues who lie are part of the problem.

The pimp costume "lie" seems somewhat peripheral and unimportant in comparison to the issues that the sting uncovered. Even bringing it up makes you look a bit silly.

what a damn sucker! yes he should definitly in prison!
Jonas