I skim through 50-100 stories a day published on Daily Kos as I consider items for Watching the Watchers. To minimize bandwidth use, a Java application that I wrote saves a cached copy of each story on my server. Because of this cache, I end up seeing stories that were deleted from the site. 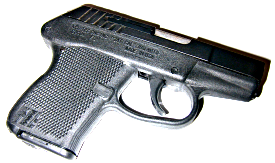 I'd heard for years that a lot of user-submitted stories are deleted from Daily Kos because of the viewpoints they espouse. So far, I'm not finding that to be the case. I've seen around 30 stories that were deleted. With one exception, they were all duplicates of another story, stories removed by the author, or test posts and other junk.

The only exception was a story that ran Saturday, titled Why Do You Want My Gun?. The story, which I've reprinted on Watching the Watchers, is a first-person account by a gun-control advocate who got robbed:

If you've ever been unlucky enough to be held at gunpoint by a stranger, you'll understand the enormous amount of fear that you experience. I wasn't able to return to work because I was too scared they would come back. Up until that point, I had been a solid supporter of gun control. However, things changed overnight. I wasn't able to sleep for more than an hour or two at a time because I was having nightmares about it. I would wake up feeling completely panicked and scared. I have never felt that way in my life prior to this incident.

The story received 220 comments on Daily Kos before it was deleted with the following tags, which I think were assigned by site admins: "troll diary, donut depot, gay hating gun nut diarist, please distribute donuts evenly across all faceless comments, 3 donuts per comment only please." The comments can't be displayed, but you can see some of them on the user page for Faceless, the author of the piece. (Kos users call some comments donuts to signify they are worth zero in the site's recommendation system.)

Though I disagree with the conclusions drawn by the author of the story, I think it was a mistake for a site admin to remove it. There are a variety of viewpoints on gun laws and the Second Amendment within the Democratic Party. It's wrong to dismiss the author as a troll spreading anti-gun control propaganda simply because the person relates the kind of experience that turns some people into an opponent of gun control.

Credit: The photo of the handgun was taken by Robert Nelson and is available under a Creative Commons license.

Frankly, I don't care if you keep a howitzer in your house, I'm just sick of you people trying to sell guns to gang bangers in my city.


A-Parently, FogCityJohn has never been in serious shock. When my heel was shattered (Literally - Seeing the x-ray was "a bit of a shock" in it-self), I didn't feel much pain at all un-till the following day (Over twenty-four hours after the incident) when I a-woke in a hospital bed in the most intense pain that I've ever experienced in my life and screaming and cursing "at the top of my lungs" un-till a kindly nurse finally appeared with a shot of Demerol.


Most Pseudo-Liberals love to point at people like Glen Beck and Bill "Oh, Really?" as an example of how crazed the "Right" is; But, I've seen a rather equal amount of crazed extremism on "both sides of the fence." I used to read the comments on Little Green Footballs and Daily Kos for the same reason: To laugh at the inane justifications that some of the commenters employ in "defending their cause."


I may not agree with every-thing that you say or do (And - On occasion - still refer to you as "That Fuck-Head who killed his bastard child lest he be the slightest bit embarrassed by it's occasional 'anti-social' behavior); But, I have to say "Good on you" for rescuing this individual's posting.

I agree with the principle of dialog from all sides; that being said I thought the story was a fairly obvious troll, mainly because it ended with the mysterious strangers whispering in the basement, maximizing the fear, with no closure as to what actually happened, let alone anything that could be fact-checked. I would probably have tossed it if I had been moderating it. What I would not have done was let the pile-on of ridicule that occurred happen either. There's a difference between pointing out a troll and simply mocking a point of view irrespective of the watertightness of the argument.


What doubt remains that 'liberals' want to democratically decide who may, and who may not post on their collective sites? 'Liberals' are promoting 'hopeful' changes to talk radio, and plot to use the 'law' to limit that media of free speech ... why can't the private owners dictate what content they will allow on their private site?


Certainly the FR moderates for content, only allowing reasoned discussion, even insulting conclusions if supported, and disallowing the regular propaganda already answered, but which the political parrots insist on repeating ad nauseam, right or left. Why then can't the owner of Kos abrogate his responsibility and allow the collective majority to decide who is a 'troll'? Isn't that what you do on the Drudge Retort? Allow the postering majority vote to decide what should or should not be removed as 'abusive'?


The free use of democracy has resulted in the ruin of every civilization which attempted that 'liberal' method of deciding questions of life, death, war and peace. In that regard, the owner of Kos is negligent in allowing others to make his decisions for him, and as you are in allowing a leftist majority to decide what content they will allow, and excusing any repression of ideas they dislike because the 'majority' decided the issue. Of course, presented the 'question', any sort of anti-gun control would be designated to be 'trolling' or some other excuse for repression of argument against their gun control angst, and just as it was so decided at Kos.


Of course you disagree with the poster's conclusion/decision since you are a 'liberal'. However, how much more regulation on top of the massive regulation over my lifetime, my father's and my grandfather's generations will satisfy your collective fear of weapons? What is the result of all the tons of legislation already done over these hundreds of years? NOTHING! Criminals still have guns where the law abiding populace has fewer and fewer, due to expense, regulation and fear projected onto them by ideological efforts to deny a natural right.


Nothing has changed except more crime with guns the regulations don't stop acquiring, and the 'liberals' keep on regulating law abiding citizens as though they were the criminals. Rightwingers as potential 'terrorists' now being touted by Democrats and their leftist ilk.


Why even bring this issue up? You do the same as Kos on the Retort, to whatever 'minor' degree you excuse it as. Are you misdirecting to hide the fact that you do the same conduct that you point-the-finger at Kos for doing ...?

I don't question the right of Daily Kos admins to moderate the site. I question the decision to delete this particular story as a "troll." There are some Democrats who believe gun control will prevent them from protecting themselves. They deserve to be heard.


I do moderate on the Drudge Retort. One reason I publish deleted comments on that site and here on Workbench is to allow others to scrutinize my decisions and decide whether they want to participate.


When people decided that the Retort was too heavy handed in moderation and they formed their own community at Political War Zone, I promoted that effort.

What a factual article. But aside from that, Have you heard this new cow song going around the internet? You know, the cow song which is supposed to be titled Hello Cow? Well, it's certainly inane, and it begs the question of just how many drugs over what period of time a person would have to do to come up with something like that, but that aside, it's become incredibly popular. It was on a Fox News segment (that surprisingly wasn't trashing the Democrats, Obama " or anything that's good for anyone, for that matter) about a dairy farm in Wisconsin where cows stand on waterbeds (really) and since then, people have been putting massive internet searches and

Thats a good news to all hence the continuous unemployment rate is gettinâ€™ high. At least this would help lessen the number. Jobs are disappearing daily all over the world. The news media is reporting hundreds of job cuts and giving gloomy forecasts.Are there any industries, where jobs will be stable throughout the dogs current financial crisis? You maybe running out of the companies to aplly in, so as long as this opportunity is here, grab it!

"If I hadn't taken the test, maybe I wouldn't be here." The Kent County Health Department is using Facebook, Twitter and other social networking sites to promote a new snakes program

The Cartels have no problem arming themselves. The Mexican military, for example, has been a regular supplier. South America and Central America have plenty of arms. Or place an order with NORINCO in China. What about Cardoen in Chile? He's the one that helped the U.S. sell cluster bombs to Saddam Hussein. Surely he can set up deals. Or bring back the Iran Contra crew, they've got the connections.