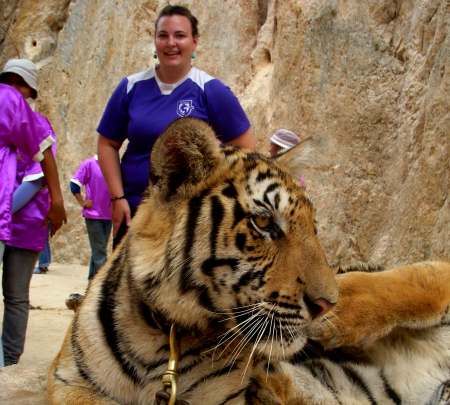 Anna Wencl, a blogger visiting Thailand, writes about going to the Tiger Temple, a tourist attraction in Kanchanaburi that lets visitors get their picture taken with tigers:

We'd heard good things about it ... but those must have been dated. The temple was supposedly run by monks who took care of tigers, but now the tigers are taken care of by younger employees who seem think it's okay to kick them and drag them by their tails to get them to do what they like. Many people have speculated that the tigers are drugged ... and I have to say, they may be right on this one. They ran us around to 5 or 6 tigers to take pictures with them and although they pawed or rolled over a few time, they didn't really do much.

The writing's unclear on what taking pictures "with them" means, but a photo shows Wencl posing beside a tiger that's secured only by a chain around its neck.

I recently chaperoned a field trip to the St. Augustine Wild Preserve, a private refuge that had around a dozen full-grown tigers. They were secured in cages that included a smaller cage so a handler could enter safely to feed them. Every cage had two external locks.

During feeding time the reason for the security was evident. One tiger, agitated by the presence of a male handler near the food, rose up on his hind legs and rattled the links of the cage. The tigers needed to show males who's the boss when they had food to protect, while female handlers didn't elicit the same reaction. The speed, strength and size of these animals is impressive. Although I'm a liberal, I must acknowledge that the only thing keeping us atop the food chain is our right to keep and bear arms.

I don't know a lot about tigers, but the 40 middle school students I shepherded through the facility left with as many limbs as they brought on the trip.

The Tiger Temple's web site denies that the animals have been sedated, claiming that they "have been hand-reared with compassion by the monks and have had interaction since they were young cubs. So they have imprinted on humans and have accepted us part of their lives."

If you're being allowed as close to tigers as Wencl is in that photo, I don't see how that's possible unless the animals have been heavily and inhumanely drugged. It seems extremely reckless to allow tourists to interact with them like that. There are more than 7,000 photos on Flickr taken at the temple, many showing people interacting with the animals like it was a petting zoo.

A report by the animal welfare charity Care for the Wild International accuses the temple of illegal tiger trafficking, systematic physical abuse of the tigers and "high-risk interactions" between tigers and tourists.

The tigers are led on a short leash from their cages to the Canyon by Temple staff. There, they are chained on fixed 3m - 5m chains, and heavy concrete bowls are against or set close to the tiger's body to oblige the animal to adopt a good pose for the tourists and maintain it. Tigers are dragged into position by their tail and even punched or beaten to adopt particular postures that appeal to the tourists.

Temple staff stay close to the animals at all times to maintain control by use of tiger urine squirted from a bottle into the animal's face. In the wild, tigers use urine as a territorial or aggressive signal: sprayed at close quarters it would represent an extremely aggressive gesture from a dominant animal.

A photo published by the group shows a small child sitting on the stomach of a full-grown tiger.

Credit: The picture of Anna Wencl at Tiger Temple is made available under a Creative Commons license.

It certainly does sound like they're drugged. Most of the "physical abuse" claim sounds rather silly when you consider the scale involved--a human punching a tiger just as hard as he can is going to have an effect rather like tapping a domestic housecat on the shoulder. However, I've never seen or heard of a cat that didn't take vigorous exception to having its tail pulled. Try that with an un-drugged tiger and the most mild reaction I'd expect would be a really loud and tourist-scaring roar, and getting an arm chomped on would be pretty likely...

It's definitely *possible* to have a tame tiger, and parade it around - Siegfried and Roy did it all the time. Then again ...


I note in most of the photos with ordinary tourists, the tigers look zonked-out. The people who run the temple aren't stupid.

"Although I'm a liberal, I must acknowledge that the only thing keeping us atop the food chain is our right to keep and bear arms." ~ Rogers (Both of them)


I've all-way considered supporting the Second Amendment to be a truly liberal stance. What is so "liberal" about trying to deny people the right to own fire-arms? That and the Pseudo-Liberals' war on smokers are the main reasons that I don't want to be associated with them in any way de-spite being socially liberal my-self.

I don't think there's anything wrong with allowing some reasonable limits on firearms ownership, such as a mandatory seven-day waiting period for all purchases, background checks and prohibitions against ownership for people who have been ruled mentally incompetent.


Liberal isn't libertarian. We favor government regulation to achieve certain ends, such as not getting shot by crazy people who bought their gun yesterday.

The Second Amendment doesn't allow for a militia...


it doesn't specify a regulated militia...


the words of the Second Amendment call for a "well regulated" militia. The Founders spelled out their request for Gun Control pretty clearly. "Well regulated."


Seems like the gun-control-lovin' liberals are the Consitutional Originalists on this one.

I visited the monastery a few years ago. Before I'd even set off I had a bad feeling about it, but after my short visit I thought much better of the state of the cats & the people who look after them.


The story goes that years ago a young cub was found, it's Mum dead, none of the local villages would take the animal & in the end a monk did.


He looked after the cat as any Buddhist Monk would & over the years more tigers were given to his care & has happens when you get multi-sexed mammals together, they bred (Panda's excluded... as are tigers in many Western zoos).


So today there's a Buddhist temple that looks after many big cats, which gives tourists the opportunity to get up close to them.


The cool thing about the temple are the other animals that wander around. Cats, dogs, rabbits, deer :o)


Anyway, if you ever end up in South east Asia, go & take a look, think you'll enjoy the experience.

That is really exciting. I would also like to visit here. How wonderful it would be to caress a tiger. The thought is enough to excite me. Thanks for the post