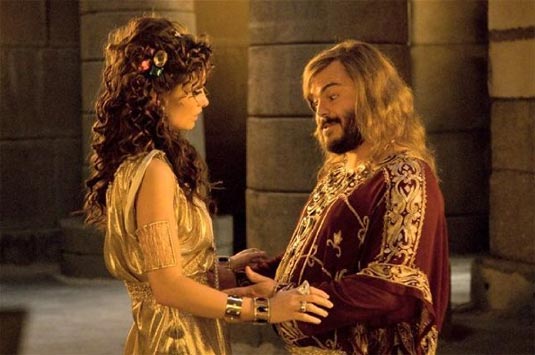 The movie reference site IMDb has a parents guide feature that's useful when determining whether a movie contains sexual content that would be inappropriate for your children. (Like most Americans I'm much more comfortable exposing the younguns to movies that contain bloodshed than any film that makes even the slightest reference to sex. I blame my Catholic upbringing and spaghetti Westerns.)

The feature is edited by users in the manner of Wikipedia and does not get editorial oversight from IMDb.

When considering whether to see Year One this weekend, I found that the users had been incredibly thorough in describing scenes that had anything to do with sex or nudity. There's so much raunchy material in the movie that the IMDb warning is 1,048 words long.

We didn't see the film.

And why was this film given a PG-13 rating? It sounds like a hard "R" to me. This movie sounds like perhaps the most disgusting movie ever made without showing genital nudity! The MPAA should be held to pay for the PG-13. As far as I'm concerned, it should be "X" rated!


It's called desensitization. After one is desensitized to
all the modern sexual protocol(sans romance or any
affection, what a nuisance), then we are psychologically
pre-disposed to anything sexual in nature. We seem to
think we are watching a cinematic performance with a
screenplay, multi-dimentsional characters, and a
DIRECTION of some kind. As long as there are no
true artisans anywhere near the work, and the liability
for mental or emotional content has been thrown out
the window, the ordeal of imagination is dispensed with.
The script and ideas have been trashed and the
substance of the movie is the delight of Dolby and
Panavision.

Wow yu guys need 2 stop because if not man yu guys r gunna regret of wat all yu did, n jus stop making movies of these n serve Jesus Christ!!!! Believe in the father, the son, and the holy spirit!!!