You may not know this, but there's a fourth Jonas Brother -- a ginormous bald black guy named Big Rob who comes out occasionally to supplement their musical caterwauling with rap. 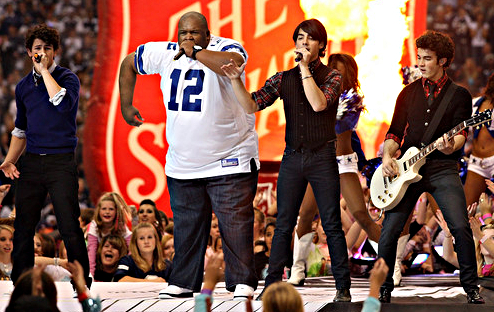 Until I found a blog entry by Rickey Laurentiis, I was not aware that Big Rob was an attempt to establish white supremacy in an unsuspecting audience of tween girls:

I've seen them around, figuratively, on the covers of magazines and on the TV, but I didn't really take notice until So You Think You Can Dance final where they performed. I was bored, to say the least, until this big, black guy came jumping onto the stage like the Koolaid Man. He appeared to be some sort of hype man ... rapping or whatever. I didn't really listen after the first few minutes. I was nauseated.

I just couldn't help but think about the (national) image of black men as soon as he -- I've learned his name is Big Rob and he's the brothers' body guard -- appeared. I mean, historically and presently. The black man as monster, brute, murderous; the black man as mandigo, rapist, oversexed animal; gross, perverse. Perhaps, perhaps I'm overreacting (but, sorry, I'm not white so I don't have the privilege not to think of these things), but when I see Big Rob flanked by the three other Jonas Brothers, I can't help but to see a very strategic move:

Big Rob is mostly obviously Other. On that stage, in that audience. His skin, bald head and not mention very large, tall size completely otherize him. In turn, as the surrogate "what is that?", The Jonas Brothers, their whiteness, is cemented, so to speak.

When I saw the Jonas Brothers perform on the broadcast of the Dallas Cowboys Thanksgiving game last fall, I noticed there was something different about Big Rob too. I think he's adopted.


That is one of the nuttiest analyses I've ever heard. I'm not white either, I'm pretty conscious of social injustice, and...WHAT?


People act like the Jonases are the lilywhitest guys to walk the planet. Newsflash: they are Pentecostal, they are Italian, they have black relatives.


They are not that white nor do they pretend to be...a lot of their performances reflect this.


Weirdos,reading weirdness into everything. Come off it.

Stupid... get a life. Grow up. Grow some balls and stop criticizing people who are trying to make a living.. Ok wow you just made a point by talking about their bodyguard. Well your really mature. Honestly I can't believe people like this hate such artists so much. By the way I don't like them nor hate them at all. I respect them for everything they do and I think they're actually really cool. Seriously man grow up!

Wohoohoh!! I LOVE the jonas brothers. Thanx for thinking about them just as much as I do!!

Sorry Rogers, it looks like you waded into a nest of Jonas Brothers fans who don't even comprehend enough of the blog post above to realize that, if anything, you're defending them from inaccurate, racist invective. The same thing happened when I wrote about Zwinky, some stupid online game aimed at tweens. Search my blog for Zwinky ... you'll find it. Ugh.


And the most racist thing about all of this is the assumption that it must automatically be racist if a black man is allowed to perform with three white men.

This has happened to me before, on a 2003 weblog post mentioning Orlando Bloom.


Any tween who took offense at that post would now be entering adulthood.

The third comment accused Orlando Bloom of being a racist. This put my blog entry as the first result for search terms like "is Orlando Bloom racist?" and got thousands of hits.


As to why Bloom was the subject of this speculation, I don't know. Maybe he also has a ginormous adopted black brother who sings rap on his albums.

Clearly too much disney has killed your brain cells. Y'all should read some critical race theory -- "pronto" (look, "pronto" is italian. that must mean it's ebonics!!!!!)

"And the most racist thing about all of this is the assumption that it must automatically be racist if a black man is 'allowed' to perform with three white men."