Pancakes and Sausage on a Stick! 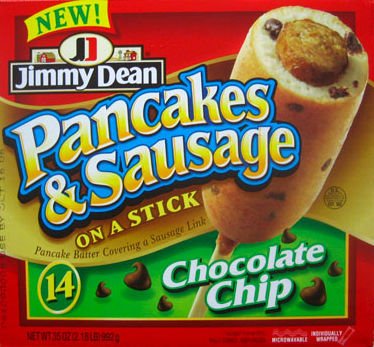 I wish I could've been present at the meeting where they came up with Pancakes and Sausage on a Stick, a frozen microwaveable foodlike product that's also a great euphemism to yell when expressing vexation. The next time I hammer my thumb or your team beats my team in a sporting event -- a possibility which is, of course, unlikely -- I will exclaim "Pancakes and Sausage on a Stick!" instead of "Jesus Christ on a Pogo Stick!"

The Chocolate Chip flavor of Pancakes and Sausage on a Stick weighs in at 13 grams of fat, 220 calories and 350 milligrams of sodium per stick (15 percent of your daily allowance). You could get two days worth of sodium from a single box.

I'm holding out for grits on a stick.

Where have you been? They were selling the Flapstick (they really should return to that name) years ago, like 15 at least. Many is the person who craved a corndog with breakfast flavoring and now anyone can take a big, processed bite of horror whenever they want.

Pancakes and sausage: fine.
On a stick: whatever floats your boat.
Chocolate chips: that's just over the top.

It's always awesome looking at the fat little lard balls drooling all over the freezer doors in the grocery store eyeing these up!

That's absolutely disgusting. Americans would eat fried fecal matter on a stick and dip it in cheese wiz if it were cheap and available. American will continue to get more fat and lazy until the entire place is just one massive ball of lard!

Oh My Good God - unbelievable. sausage, with pancakes and chocolate... that's a heart attack on a stick!!!