Finding the 'Two and a Half Men' Coffee Mugs 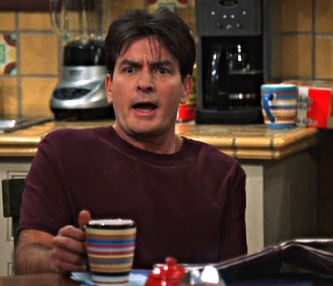 After watching Two and a Half Men for several years, I reached a point where I had to hunt down the cool coffee mugs that Charlie Sheen and Jon Cryer use on the show. The sitcom spends a lot of time in the kitchen, and Charlie and Alan Harper each drink from their own distinctive striped mugs. I'm not alone in my obsession. A discussion on TV.Com led to Tabletop Lifestyles on Amazon, which sold Charlie's mug under the name Sedona 16-Ounce Mug. I ordered four, and I'm still searching for the first houseguest who is impressed when I tell them the mugs have been seen on TV.

That mug is currently unavailable but the Iittala Origo mug designed by Alfredo Haberli looks like the design that inspired the Sedona.

A version of Alan's mug was previously available from the CBS store, but the product warning scared me:

WARNING TO CALIFORNIA RESIDENTS: The colored artwork or designs used on this product contain lead and/or cadmium, chemicals known to the State of California to cause birth defects and other reproductive harm. This warning is required by Proposition 65.

According to the Society of Glass and Ceramic Decorators, this warning is the product of a 2005 legal settlement about excessive levels of lead and cadmium on the exterior surfaces of diningware.

I don't know if the coffee mugs in California are particularly toxic or if the state just has more badass product liability lawyers. But since the Harpers have been drinking from these mugs for years, that could be the reason none of Charlie's steady procession of sex partners produced another half-man during his time of the show.

Don't worry, Rogers -- that warning is only for California residents. :)


Those Prop 65 warnings turned out to be a complete joke. Every single parking garage has a Prop 65 warning plaque posted next to each elevator door, because of the presence of cars (which contain gasoline, etc.). I guess the sign manufacturing lobby is happy with Prop 65!

I have to chuckle at the Leftists/Democrats/liberals and their neo-Victorian list of 'moral' crimes; 'evil' poisons, 'sinful' fattening foods, 'unfree' speech, and vicious hatred of competing 'religions', ad nauseam.


The gang-like zealotry of 'liberals' is becoming oh-so obvious; combined with their blatant hypocrisies ...


Would anyone care to wager that ART is not labeled with a list that reaches the floor with the chemicals included in their precious 'religious' paintings of Polar Bears, et al?


California is a creepy example of the coming communistic 'Nanny' state where they'll incrementally remove those distressing freedoms and liberties that are destroying this nation's achievement of their utopian, socialistic dreams ...

Wasn't Prop 65 a proposition? That would mean it wasn't imposed on the citizens by the State; it would mean the people voted for it.

Yes, SAMIAM. In the case of Prop 65, "The State" did nothing to the people.


Prop 65 passed in a landslide - conservative Republicans, liberal Democrats, and all those in between voted for it.


It was endorsed by Republican Governor George Deukmejian.


The "liberal conspiracy" thing is officially played out.

Sam reasons, "That would mean it wasn't imposed on the citizens by the State; it would mean the people voted for it."


This must mean that McCain/Palin are president and vice president for almost half the nation!

The Sierra Club must be Rightist/Republican/conservative then, right?


The Green minority (who are apparently now rightwing) is seeking political power and do it using this sort of scare tactics. 'Man-made' Global Warming is the same effort to prey on ignorance to frighten the public into giving-up their freedom to 'fight' their 'war' against 'the enemy' and by attacking one 'limb' (US GDP/GNP) of the world sized 'giant'.


Yeah, sure, no fibs from the Leftists/Democrats/liberals about this, is there?


"The "liberal conspiracy" thing is officially played out."

This must mean that McCain/Palin are president and vice president for almost half the nation!


Not what he's saying. He's saying that you can't claim The State imposed Prop 65 on the citizens. It was a ballot proposition. The citizens voted for it directly.

You guys must be newbies. Other wise you would know that you can't confuse Tadowe with the facts.

Here's on for ya Rogers.

Sam says, "Not what he's saying. He's saying that you can't claim The State imposed Prop 65 on the citizens. It was a ballot proposition. The citizens voted for it directly."


Hmmm, what example to use?


How about the laws against pederasty? Are they imposed on homosexuals; however legislated? Aren't all laws 'impostions', whether the public votes, or not?


The law is quite obviously much more than a "Clean Water Act", and your effort to obscure the details about how minorities influence voters is probably very successful in this thread ... where those inclined to the Left will nod their collective head in agreement that the 'majority' were knowledgable of the law and its ramifications.


Now that the cost(s) are becoming apparent, and the minority is clamoring to *impose* even more restrictive laws and regulations to gain political power (everywhere now and not just gullible California 'voters') are becoming better known for their intent.


Even so, intelligent (even brilliant) individuals will still be the prey of ignorance and the minority who stalk them; e.g.; "I don't know if the coffee mugs in California are particularly toxic ..."


This comment is out-of-context and which I took to be part of a humorous punchline, but which demostrates the point that fear and ignorance are the proximate cause for Prop 65, and which the "state" (whatever minority has the power of the law) has INCREASED "its" imposition(s) and power to restrict and deny freedom and liberty; however much you care to denigrate that loss.


Further "Green" laws will do the same, and with the cooperation of political ideology, and who don't care about individual liberty and cost, but just so their team/gang is in-charge and the 'evil' one part in a billion of lead in the water is *IDENTIFIED* ... but not the cadmium yellow and cobalt blue, etc. in *ART* ...

Lonestar makes me the subject to belittle, "You guys must be newbies. Other[sic] wise you would know that you can't confuse Tadowe with the facts."


Actually, I reply here because this site (hopefully) attracts expertise and the consequent indication of intelligence that/this area of knowledge implies. In that regard, I hope for cogent and responsive discussion from those who consider themselves Democrats, liberals, whatever leftist label they might apply.


Well, that was my original intent up until I found that there is no such thing as intelligent debate, on point, from *any* of that side of political ideology on this site, either! At least up to the present. Of course, the exception-to-the-rule (actually very intelligent individuals) have tried to rebut and otherwise support their opinions in their ones-and-twos, but upon further discussion inevitably resort to ad hominem and demonstrations of hypocrisy in using the very "Hate Speech" they otherwise pretend to deplore.


You, yourself ... the individual 'you', is a prime example, as you ignore whatever happens to be a 'fact' about the thread or point(s), in your zeal to denigrate and belittle me, personally. (Save the further insults about "whining" and since I enjoy these displays of hypocrisy from your ilk).


You unconsciously project your avoidance of 'fact' and apply it to me as an insult. I expect you're either a pretty callow sort of hypocrite, or if more mature, then a bit dense ...

Charlie and Alan already have the same Fiesta ware we own.

Ahhhh!
I found some that look like charlies
I'm so happy:)

Been watching it from the start. I read on an AOL poll that it's the most watched comedy show on TV and I certainly understand why. I was very happy to see Jon Cryer get an Emmy. He's hilarious. They have that great illusive "chemistry" that made all the great shows great. The cast works well off of one another and I don't think Charlie has any ego giving some of the most hysterical lines to Jon or Conchetta or Angus. I remmeber Holland Taylor from Bosom Buddies - she's still a great acrtess and looks even better now than she did some 20 years ago. Its a pleasure to watch all of them and no matter how crappy my day might be (although I'm happy to say I don't have crappy days too often), I put Two and a Hal Men on at 7pm and I know I'm going to have an hour of hysterics to look forward to.


Brilliant writing; although I don't know how they get away with some of the stuff they say.

I am interested in the roosters (salt and peppers shakers) that sit on the table on Two and a half men. Where can I purchase them. Thanks.

this is awesome! first search returned from google! I want these cups!!! Thank you so much!

you can get the mugs at www.ttustore.com

I too kept hunting for the Coffee Mugs since last October 2009. , even my husband likes them. I finally found a good match (if not the same) back in February 2010.at the website site JEAN mentioned on 3-4-10.
They also have matching dinnerware pieces designed called Sedona. I also purchased matching cereal bowls.I then purchased square red plates(locally elsewhere) to color-match the mugs & bowls.
Now I want the matching serving bowl at (Tabletop-unlimited Inc.) So go to > ttustore.com

Just ordered the mugs...been wanting to get them for years!!! Yay..Love Two and a Half Men!

I'm awfully glad that I'm not the only one... Now, does anyone know where to find the Dragonfly wall plaque from Ross' apartment in "Friends"?

www.two-and-a-half-men-tassen.de check these out if they contain the same

I am also looking for salt and pepper rooster shakers from two and a half men. Can someone help??

I updated this post with a new link to buy the coffee mugs.

The Sedona mug is currently unavailable for sale but there's another store selling an Alberto Havarti design that's the same Two and a Half Men mug.