While browsing the list of speakers to see if they invited any actual content-generating users, I found one of the greatest speaker bios I've ever read. Meet Dawn Clark, founder of DawnClark.Net:

A pioneer in the field of Cyberenergetics, Dawn Clark is a sensitive who stands at the nexus of science and spirituality. Fields influenced by Cyberenergetics include game theory, psychology, biological systems, organizational structure, philosophy, systems theory, and architecture. Dawn's deep insights in energy dynamics at the sub-atomic level are relevant for developing strategic direction and alignment, understanding how products engage, engross and affect subtle fields, all the while factoring in the values of the individuals or audiences critical to making a solution path workable. 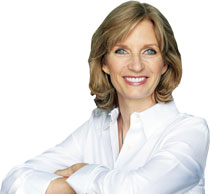 Where most people see empty space, Dawn perceives wave form, frequency, and interaction. She sees depth in dimensions and from an early age began experiencing retro and pre-cognitions. A near death experience heightened her sensory abilities. Recognizing her natural gifts, a former elite American counter intelligence agent, whom she assisted in writing books, trained her in the art of spycraft and developed her skills in remote viewing, subtle energy perception and engagement. Rather than apply her skills in the government arena, Dawn chose instead to walk the path of creating solutions, services and learning programs to help people and organizations realize their potential.

Internationally published, Dawn has guided clients working with Fox Entertainment, ABC, PBS, Wall Street Journal Online, 2010 Olympics, and many others, including creative artists, entrepreneurs and researchers. By bringing to light that which is for most unseen, Dawn consults on business development, identifies deep drives of engagement, offers insight as a future historian and tools for empowerment that go beyond what traditional counsel has to offer. A faculty member at the Omega Institute, Dawn is also a member of the Association of Humanistic Psychology, the International Society for the Study of Subtle Energies and Energy Medicine, and the Foundation for Mind Being Research.

I have a theory that every person on earth has one superpower, but it's often such a trivial ability that it goes completely unnoticed. My superpower is the ability to enter any mall department store and know exactly which direction to go when seeking the mall entrance. My power, though occasionally of moderate utility, does not lend itself to a catchy superhero name.

If I could see energy at the sub-atomic level, I'd use that power for a hell of a lot more than helping big media companies reach their potential.

Rather than apply her skills in the government arena, Dawn chose instead to walk the path of creating solutions, services and learning programs to help people and organizations realize their potential.


I think I'd apply those skills in the arena of robbing banks. Good to know the government has people who can train you in "remote viewing, subtle energy perception and engagement." Actually, that kind of sounds like a rapist's skill set.

Doug's superpower is reading in the car without getting nauseated.


With "the art of human alchemy" she can "repair an individual's damaged energetic fabric".


She can also "perceive energetic connections", but that's nothing compared to her ability to unlock "interrelationships previously invisible " matter vibrating at different frequencies as well as underlying organizing templates and morphic fields".


And the real mystery is how she sleeps at night.

My superpower is the ability to leap over multiple project deadlines in a single bound of procrastination.


How did she get to be a speaker? I guess it must be all that user-generated crap dripping out of her resume.


Your SuperHero name should be All Exits Lead to Orange Julius Man. Not sure what mysuper power is.

Is "see energy at the sub-atomic level" all that useful as a superpower? I suspect most superpowers wouldn't be all that useful overall, especially if you aren't otherwise suited for the job they would indicate (and if you don't have the attribute "bulletproof", that's plenty of reason right there not to take vigilante/adventurer). She doesn't describe except vaguely what she sees, and it might not be very helpful. You can now buy a pair of goggles that'll simulate "see infra-red" pretty well, yet there's no great use for this outside of a relatively few specialized applications.

"There's one born every minute".


In other words, ignorance is a growth market. Invest wisely.


I am Dawn, and I wanted to jump in the conversation.


These "super powers" are inherent to us all...some of us are just more naturally adept than others, a little like athleticism. Skills can be developed - a little like going to the gym can build muscle tone.


Bank robbing....hmmm....hadn't thought of that. :-) Actually that's not how it works. My abilities were enhanced by four near death experiences. These experiences changed me and gave me a gift of intuition and perception that I feel called to share with others. For me, my abilities can only be leveraged to awaken the best in the human spirit. So, yes, I choose my clients and people I surround myself with very selectively.


If you are at the expo, I hope you attend my session, and if you do, please come say hi. If you aren't attending, please sign up for my email newsletter and I'll keep you posted on my new books and events.
My upcoming book ties in a lot of my experiences and can best be described as the Bourne Identity meets Indiana Jones tied in with The Celestine Prophecy.


And you are right; I don't sleep much at night!


With Love and Light,
Dawn

Dawn patronises, "These "super powers" are inherent to us all ..."


Gautama Buddha (perhaps a more expert authority) taught that psychic powers were another aspect of the illusion of existence (Mara) and a literal trap for souls advancing on the 'spiritual' plane which is humanity - the only existence on an infinity of 'planes' where nirvana/gnosis is possible.


However, the most successful mediation technique is also the one which leads to psychic phenomenon, and therefore the cautions:

I apologize for being so declarative, Dawn. I suppose I was second guessing your apparent advertisement/brag and just assumed you had been distracted from the philosophical goal. Indeed, the natural ennui of practicing your skills might even encourage a layperson's deeper meditation. Good luck in your endeavor.

Dawn, if you're still reading the thread, what are your super-powers in practical terms? That is, I've always thought Superman described his powers in terms of effects, not mechanics. For example, instead of saying "I am sensitive to a wide range of energies and can perform very fine-grained interferometry on them", he says "I have telescopic vision" (thus, people who assume he has telescope lenses in his eyes are being overly literal - it's just a name, not the mechanics). "Subtle Energy Perception Lass" wouldn't be a very informative codename.