Who Belongs in the Brat Pack? 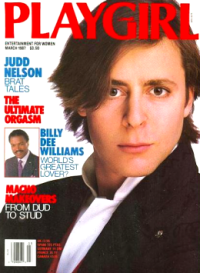 I don't spend enough time tackling the big questions on Workbench, so I'd like to rectify that today by addressing a subject of great import among those of us who came of age in the '80s: Are James Spader and Robert Downey Jr. part of the Brat Pack?

The term Brat Pack was coined by journalist David Blum in the June 10, 1985, issue of New York magazine. His cover story Hollywood's Brat Pack describes a world, now lost, in which attractive young women fought for the right to engage in consequence-free heterosexual coitus with Judd Nelson.

If Rob Lowe seemed to be inviting all too much attention from the girls, Judd Nelson acted as though he wanted nothing to do with it. His fame, too, helped attract them -- they recognized his tough-guy looks from his role as the wrong-way kid in The Breakfast Club and sought his attention. But as Alice sat down in an empty chair next to him, Judd Nelson announced to anyone within earshot, including Alice, "There is a line. When someone crosses the line, I get angry. And when someone sits down at the table, they have crossed the line. You can let them get close" -- he looked around at Alice and the swarm of girls -- "but you can't let them sit down." ...

Everyone in Hollywood differs over who belongs to the Brat Pack. That is because they are basing their decision on such trivial matters as whose movie is the biggest hit, whose star is rising and whose is falling, whose face is on the cover of Rolling Stone and whose isn't. And occasionally, some poor, misguided fool bases his judgment on whose talent is the greatest.

Only a fool would attempt to judge Brat Pack members on the basis of acting talent. The editors of the Pack's Wikipedia entry have spent a great deal of time defining eligibility for membership:

Appearance in one, or both, of the ensemble casts of John Hughes' The Breakfast Club and Joel Schumacher's St. Elmo's Fire is often cited as a prerequisite for being a core Brat Pack member.[10][11][12] With this criterion, the most commonly cited members include Emilio Estevez, Anthony Michael Hall, Rob Lowe, Andrew McCarthy, Demi Moore, Judd Nelson, Molly Ringwald and Ally Sheedy.[5][6][13][14][15][16] Conspicuously absent from most lists is Mare Winningham, the only principal member of either cast who never starred in any other films with any other cast mates.

When there are nine citations in just three sentences, you know that a major bloodbath has taken place behind the scenes at Wikipedia. The victorious editors, clambering over the corpses of their opponents with their cold, dead hands still clutching keyboards, have taken a conservative position on membership that relegates Spader and Downey to "close contributor" status. Jamie Currie, the web's preeminent Brat Pack scholar, also uses Wikipedia's eight members and consigns Downey and John Cusack to "Possibly Pack" status.

This is a crime against the '80s. I recently caught the tail end of Less Than Zero, a 1987 film I've seen in random order over the years while channel surfing and reassembled in my brain. That movie has everything we've come to associate with the great works of the Brat Pack: a lily white cast, self-absorbed young protagonists who yearn for more interesting personal problems, big haired women in shoulder pads and absolutely no awards for acting. 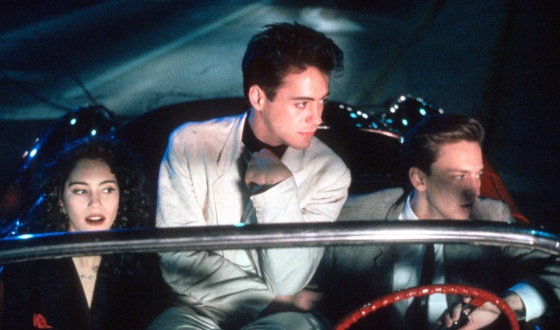 I take the liberal view of Brat Pack membership. If you've starred in at least two films with a lead actor from Breakfast Club or St. Elmo's Fire and you were younger than 30 at the time -- the Harry Dean Stanton exclusion -- you ran with the Pack.

The decision to admit these actors has far-reaching consequences that become clear when you spend too much time on IMDB's People Working Together search page.

The appearance of three or more Brat Pack members in a film grants it first-order status alongside Breakfast Club and St. Elmo's Fire, so Less Than Zero, Pretty in Pink and Hail Caesar also can bestow membership upon their stars.

Jami Gertz starred with Downey, McCarthy and Spader in Less Than Zero, Hall and Ringwald in Sixteen Candles and Spader in Endless Love. Count her in.

John Cusack starred with Gertz, Hall and Ringwald in Sixteen Candles, Lowe and McCarthy in Class, Spader in True Colors and Bob Roberts and Moore in One Crazy Summer. He's way, way in.

Charlie Sheen starred with Cusack, Gertz, Hall and Ringwald in Sixteen Candles, Estevez and Nelson in Never on Tuesday, Estevez and Moore in Wisdom, Estevez in Young Guns and Men at Work, Cusack in Eight Men Out and Being Jon Malkovich and Spader in Wall Street. He's the mayor of in.

Because Sheen and Estevez are brothers who often work together, sometimes on films that no one outside their immediate family went to see, there's potential for chaos here. The first-order clause must be modified to exclude movies in which two of the three Brat Pack stars are siblings. (My apologies, John and Joan Cusack.)

So if you starred in at least two films with a lead actor from Breakfast Club, St. Elmo's Fire, Less Than Zero, Pretty in Pink, Hail Caesar, Sixteen Candles or Class, and you were younger than 30 at the time, and the film did not star two siblings with less than two otherwise eligible members, you belong to an imaginary group of middle-aged actors whose association will circumscribe your career until your dying day.

Oddly, I have yet to find a way to admit Kevin Bacon.

Coming soon on Workbench: Who's the better Darrin Stevens?


I really want to write a pithy answer that examines the use of the word "brat" and whether it could actually exclude some actors because of its very definition. I mean, Mare Winningham became such a poignant addition to a string of Lifetime movies that I dare say one could never consider her a brat.


As I said, I really want to explore your essay in depth, but I have to write a white paper about online voting, create some blog posts about organic eating, de-technify a technical paper on a new technique for eye surgery, and waste at least an hour or so on Twitter.


Please rest assured that my response to your post would have been damn insightful.

Rogers, I've been reading your blog for years, but this is the first time I've been moved to comment. Excellent article! I came of age about when you did, I suspect.


I liked a lot of those movies at the time. They are terrible, of course, but they got into my system at a point when I was defenseless against them. Now I'm stuck with this stuff.

Welcome, Allen. I'm glad our shared generational tic has drawn you out. I am incapable of switching the channel when I hit one of these films. I think I've seen Bad Influence about 50 times.

Rogers, this college basketball player's blog is one of the more entertaining things I've seen online lately and seems like the sort of thing you'd have written had you been a Screaming Eagle hoopmeister. I particularly enjoyed his essay on the relative lengths of high school vs. college Bball shorts. Or maybe I just like the idea of calling long shorts "shants." You were a shants wearer at UNT, if I recall correctly, while I engaged in unfortunate Stocktonism.

Less then Zero was about drug addiction and slef absortion, Downey had the added bonus of actually being a drug addict.


Downey is by far the best actor to come out of that group, most have fallen off the map altogether. Hall, Sheedy, and Nelson ended up nobodies.


I don't count Sheen or Estevez in the group, they already had careers at that point.


Cusack and his sister are still making movies and are working actors, but nothing special.


And is Rob Lowe still alive?


And Sixteen Candles and Weird Science tie for best movies to come out of that time.


All and all, this version of the Brat pack have been underwhelming to this point.

Oh yea, I still want to nail Molly Ringwald, even after all these years.

Could you describe the ruckus?


BTW, imagine a movie made today where the kids get high in school and it is portrayed in a positive light..

This is a very funny article & Rex shows up...


I'm a fan of Molly, of course, & why Rex did you had to take it somewhere else?


But Judd was something else in his signature movie which I saw many times as well.


"Free Jack" & "Repo Man" gave Emilio a whole another category which Brad Pitt & Bruce Willis of "12 Monkeys" fame can at least 'shine on' with.


Thanks for the showing us the love we had here for that Pack...& the great memories that still remain...

Rex asks, "BTW, imagine a movie made today where the kids get high in school and it is portrayed in a positive light.."


Don't have to imagine it:
American Beauty (won the Oscar for Best Film)

Yes, but in American Beauty, the kid selling the pot was prtrayed as a pseudo adult. In The Breakfast Club, they were all kids, all in detention, all getting high and having the time of their lives.


It just wouldn't happen today, the studios are too afraid of the drug message.


Yeah, sure... just wouldn't happen... kids getting high and having the time of their lives in a movie.


You know as much about movies as you do about politics.

Just so the the rest of the class knows Anon, what year did Dazed and Confused come out?

"Dazed and Confused" came out waaaay back in the mid '90s, Rex.


But you're totally right - nowadays you'd never see a movie where kids have fun on pot.


A lot of times what people will do before they post an opinion about something is they'll get informed first. Weird, huh?


Hey - did you know America's never elected a black President? That would never happen.

Demi Moore, Judd Nelson, Molly Ringwald and Ally Sheedy.[5][6][13][14][15][16] Conspicuously absent from most lists is Mare Winningham, the only principal member of either cast who never starred in any other films with any other cast mates.


No, that was actually Judge Reinholt there and it wasn't even Mare Spud was thinking about but a really young Jenifer Jason Leigh.


The IMDB page on Mare includes the classic definition of the Brat Pack with the nine original Brat Packers...


Can't get Kevin Bacon in there?


Well he starred with Elizabeth Perkins in "He Said, She said" and Elizabeth was also in "About Last Night" with both Demi Moore and Rob Lowe so that's gotta get him at least near the door to the clubhouse.


Dick York was the vastly preferred and superior Darren Stevens.

Taking away your man card for ending a column in Judd Nelson forever!

How has no-one discounted Anthony Michael Hall from the list because he wasn't cool enough?? Plus I do object to the continued use of 'starred in...' when referring to bit parts - Cusack was billed 16th in Sixteen Candles, with Gertz coming in at 26th... can we say 'appeared in...'


And yes, I do appreciate the irony of getting pedantic about a year old article, but this is the internet, gosh darn it :p

Why wasn't Demi added in the Brat Pack list of membership? That is where she was initially noticed, actually. At least by my baby-boomer status. I'd never noticed her (or heard of her) before Less Than Zero.