The Story of Jimmy Wales and Bomis Babes

In an interview with Wired News, Wikipedia leader Jimmy Wales renewed his objection to the statement that Bomis Babes was pornographic: 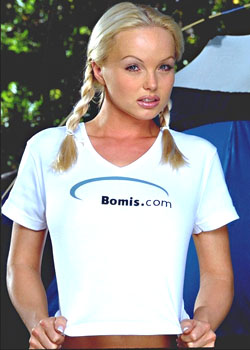 It's tough to judge Bomis Babes fairly, because at some point it was removed from the web along with the Internet Archive cache and other not-porn on the site. I know this because I did a comprehensive Google image search last night on the term Bomis looking for smut, clicking through page after page of results.

And people say bloggers don't do any original reporting. My right wrist is killing me.

Saint appears on the Bomis entry of the French and Luxembourgian editions of Wikipedia. The picture was released with Wales' consent, as he acknowledged in a 2003 Wikipedia edit:

Bomis owns the copyright to that photo, and while we don't release all of our promotional photos under the GNU FDL, that one is fine. I always wonder what happened to the photo of Aria Giovanni on my Ferrari. Hmm ... the mysteries of Wikipedia.

According to Wikipedia, Giovanni is an actress who posed on a Ferrari given away by Bomis in 2000 (though the winner reportedly took cash instead). "She has gained particular respect for being among relatively few large-chested models working in the field who have not undergone cosmetic surgery." 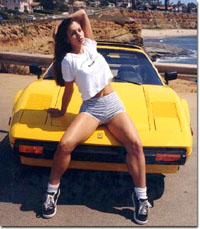 The last vestiges of Bomis Babes on the web are several hundred thumbnail images and cached pages that haven't disappeared from Google yet. (Some may be excluded by Google SafeSearch.)

There was lots of cleavage at the show. We just happen to like Stormy's the best.

WALES: Well, Bomis is -- it's a search engine so there's all kinds of content on there. And Bomis always had a market similar to say Maxim magazine. So it's kind of a guy-oriented search engine. But, yes, no. The story is much exaggerated by -- through history so.

WALES: Something I struggle with constantly by the ...

LAMB: At some point somebody said you drove a Hyundai but then there was a parenthesis around it, no, he actually has a Ferrari.

WALES: Well, I do actually have a Ferrari. It doesn't work at the moment and my Ferrari cost less than most people's SUVs.

That interview with 'Wired' magazine mentioned a comparison between Wikipedia and the Encyclopedia Britannica by 'Nature' found error rates between the two publications were comparable in a number of expert subjects.


When I was a student, the Britannica seemed to be regarded by most people as the irrefutable 'last word' on any subject. When I got older and learned how political academe really is, I wondered just how authoritative some of its articles were.

Maybe it's not his wrist that is aching. Praise Allah and vote for Achmed Chalabi!

What do you mean "poorly sized company T-shirts"? They were sized just right, imho.

My reaction to this news about Jimmy Wales? A big yawn. He's human, so what else is new? Everybody who posts at this blog, or any other, for that matter, has his or her foibles. Jimmy has his, like everybody else. At least he seems to like 'em 'au naturel'.

You people. You got nothing better to do than dump on this man that created something so cool? If you ask me, this is a hi-jack of a guy's singularity.

I'll give the man props. Wales has a sense of humor, and he's got a measurable amount of libido. Does somebody have a problem with that? He's no angel, but who is?

I've got more entertainment out of this little exploit than anything on my TV, lately.

To paraphrase, "Thrown together in a crisis, Strangers share life stories."

Take me back, way back.

Is it just me, or is there something subliminally suggestive about the word "denuded"?

you can find that there most definitely was pornographic content on Bomis (or at least linked-to from Bomis) by checking the internet archives...